What Aiden Markram can learn from opening partner Dean Elgar 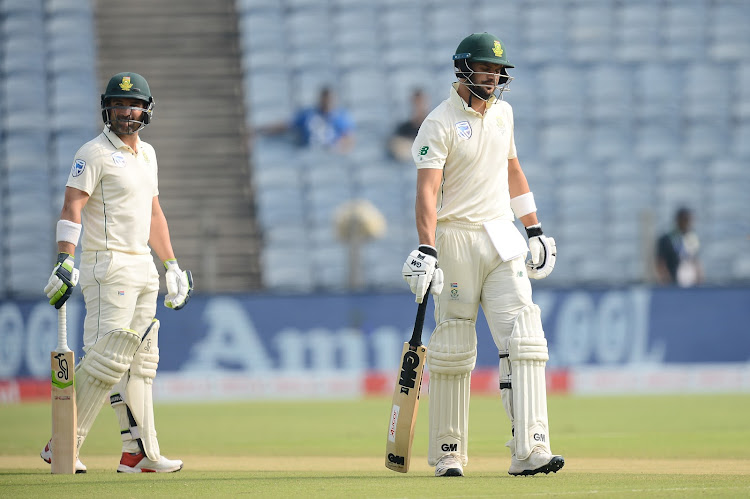 Aiden Markram (R) and Dean Elgar (L) are low on confidence more so for the former who is on his way back to SA after sustaining an injury that ruled him out of the third and final Test against India.
Image: Isuru Sameera Peris/Gallo Images

Clearly‚ Dean Elgar and Aiden Markram aren’t saying much to each other besides‚ “Yes!”‚ “No!”‚ “Wait!” and‚ considering how South Africa’s men’s Test series in India has unfolded‚ “Eish … Sorry …”

As openers‚ Elgar and Markram are at the sharp end of the batting problems that have beset the visitors in a rubber India have won with a game to spare.

Only once in four innings have they made it into double figures together‚ and even then not by much — the first wicket fell at 14 in the eighth over in the first innings in Visakhapatnam.

It’s been steadily downhill from there: four runs in 3.3 overs before the Indians struck in the second dig in Vizag‚ two in 1.2 overs in the first innings in Pune‚ then nought in two balls.

And‚ three times out of four‚ the first to go has been Markram.

Ravichandran Ashwin trapped him in front for five in Vizag‚ but he seemed to have found a way to survive — though not prosper — in a second innings in which it needed a fine return catch by Ravindra Jadeja to remove him; sixth out for 39 off 74 balls.

Only for Markram to suffer a pair‚ both second-ballers‚ in Pune.

Something had to give.

Turns out that something was Markram’s wrist.

A Cricket South Africa (CSA) release on Thursday said he had been ruled out of the third Test in Ranchi on Saturday “after sustaining an injury … following the opener’s dismissal in the second innings of the match” in Pune.

“In a moment of frustration with his own performance he lashed out at a solid object.”

In english‚ Markram punched a wall and broke his wrist.

“It’s sad to be going home on this note and I completely understand what I’ve done wrong and take full accountability for it‚” the release quoted Markram as saying.

“It’s unacceptable in a Proteas environment and to let the team down is what hurts me the most.

“I’ve learned a lot from this and the other players‚ I’m sure‚ have learned from it as well.

"We understand in sport that emotions run high and sometimes the frustration gets the better of you as it did for me.

“But‚ like I said‚ it’s no excuse. I’ve taken full responsibility for it‚ I have apologised to the team‚ and hopefully I can make it up to them and the people of South Africa soon.”

At 32 Elgar is‚ in the nicest possible way‚ the grumpy old man of South Africa’s squad.

Faf du Plessis and Vernon Philander are older‚ but no-one can match him for moaning.

Thing is‚ there’s wisdom in his whining.

“You get to know yourself quite a lot when you come to the smaller places‚ where the hotels are maybe not as good and you get challenged by the food you eat potentially.”

In other words‚ Elgar didn’t quite say‚ you might have more chance of having your brain scrambled than successfully ordering your eggs that way.

Not that he was about to go sunnyside up: “[India are] very streetwise and clever with the touring teams. They definitely push your boundaries and they test you.”

Markram has failed that test this time.

He has scored four centuries and six half-centuries in 35 innings‚ but only eight of those trips to the crease have been in Asia — where he averages 10.50‚ has a highest score of 39 and faces‚ on average‚ 24.5 balls per innings.

Only two of his dozen centuries have been scored in the sub-continent‚ one of them the 160 he made in Vizag.

But he has been there‚ done that and got the experience in ways that Markram — seven years and 65 innings his junior — has not.

Markram could do worse than stay in touch with Elgar‚ especially while he is in rehab and away from his teammates.

His skill and talent suggests he will reach Elgar’s level of belonging‚ although fulfilling his potential will not come easily precisely because he has a lot of potential to fulfill and he is‚ currently‚ a long way off the mark.

But‚ even though it’s never a good idea to break bones‚ it’s good to know how much he cares.

It takes 32 hours to drive the 1,582 kilometres across India from Pune‚ near the west coast‚ to Ranchi in the north-east.
Sport
2 years ago

Cricket SA (CSA) have disputed the Western Province Cricket Association’s (WPCA) claim that they are in breach of the memorandum of incorporation ...
Sport
2 years ago