Where will SA's runs come from in Ranchi? 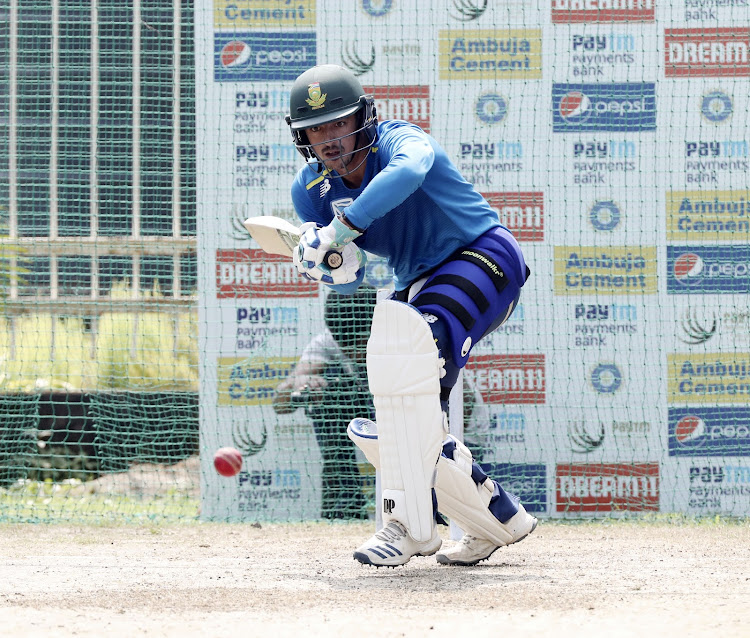 Will Zubayr Hamza get a chance to play in the third and final Test against India?
Image: Gavin Barker/BackpagePix

The first question asked of Faf du Plessis at his press conference before the third men’s Test against India in Ranchi‚ which starts on Saturday‚ earned a suspended sentence.

“We’re making a few changes to the side‚” Du Plessis said in response to a reporter who wanted to know what the South Africa captain’s team might look like.

“Probably the batting order will change. Let me think about it — I’ll give you something towards the end.”

Had Du Plessis not thought about it forever and ever‚ amen?

Had he not had enough time to agonise over his options since South Africa were hammered by an innings and 137 runs in Pune on Sunday‚ which came after they had crashed by 203 runs in Visakhapatnam?

Of course he had.

Du Plessis has likely thought about not a lot else since the start of the series.

Mostly‚ he’s been thinking about batting.

“As a player all you want to do is grow‚” he said. “For all of us‚ it’s about converting.

“Sixties aren’t going to win Tests for us. I need to bat big.”

Du Plessis has batted bigger than most. His 137 runs in four innings is more‚ in South African terms‚ than only Dean Elgar’s 216 and Quinton de Kock’s 147.

The problem is Mayank Agarwal and Rohit Sharma have each scored more than 100 runs more than Elgar‚ and that India’s two double centuries and a century put South Africa’s two tons in the shade.

Those centuries‚ by Elgar and De Kock‚ were scored in the visitors’ first innings of the series.

That’s an awful lot of grinding‚ catch-up‚ losing cricket ago; time in which South Africa have been bowled out all four times and India not once.

“It dents your confidence but international sport is supposed to be hard‚” Du Plessis said. “We can’t expect things to just happen.”

But things are bad enough for Du Plessis to clutch at the straw of South Africa’s experience in their previous series in India‚ in November 2015.

“We came here last time with a team who had the best record abroad and we still struggled.”

Despite the presence of the now-retired Hashim Amla‚ AB de Villiers and Dale Steyn — who bowled just 11 overs in the first Test before breaking down with injury and missing the rest of the rubber — India won 3-0‚ albeit with the help of unfair pitches.

The surfaces have been exemplary this time. The difference is that the South Africans‚ their batters especially‚ but also their fast bowlers‚ haven’t been up to scratch.

And that the Indians are all but unbeatable at home. They have lost only one of the 32 Tests they have played in India since December 2012‚ and won 25.

The victory in Pune sealed their 11th consecutive win in a home series‚ a world record.

“They’ve been much better than any opposition who’ve come here for … they’ve been incredible‚” Du Plessis said.

As for the pitch in Ranchi‚ where only one Test has been played — a draw involving Australia in March 2017‚ when a double century and three centuries were among the 1‚258 runs scored at the cost of 25 wickets — Du Plessis’s eyes were spinning‚ you might say.

“It looks a bit drier‚ a bit crustier‚” he said.

“I think the wicket will spin. It’s a different colour — it’s got that dark‚ dry hardness.

“I think reverse swing and spin will be factors.”

So much for what he thinks. What he knows is that‚ “If you get runs in the first innings‚ anything is possible.”

Du Plessis’s team know so just as well as he does. Putting that knowledge into action has eluded them through their own lack of enterprise — if you have feet‚ use them — and India’s excellence.

The challenge of changing that narrative took a new turn when Aiden Markram was ruled out with a self-inflicted broken wrist.

According to a Cricket South Africa release on Thursday: “In a moment of frustration with his own performance [after being trapped in front by a ball that wasn’t to hit the stumps in the second innings in Pune]‚ he lashed out at a solid object‚ resulting in his injury.”

Opener Markram has scored 44 runs in four innings‚ so his is no great loss to the cause.

Who will replace him? As the press conference broke up Du Plessis got back to the reporter who had asked him the first question.

That would be Zubayr Hamza‚ who has spent the first two Tests on the bench.

He last picked up a bat in seriousness on September 26 in a tour match in Vizianagaram‚ where he scored 22.

In the same innings Markram retired when he reached 100 off 118 balls‚ a performance that would seem beyond him now‚ and not only because he has since faced exponentially better opposition.

It takes 32 hours to drive the 1,582 kilometres across India from Pune‚ near the west coast‚ to Ranchi in the north-east.
Sport
2 years ago

What Aiden Markram can learn from opening partner Dean Elgar

Clearly‚ Dean Elgar and Aiden Markram aren’t saying much to each other besides‚ “Yes!”‚ “No!”‚ “Wait!” and‚ considering how South Africa’s men’s Test ...
Sport
2 years ago