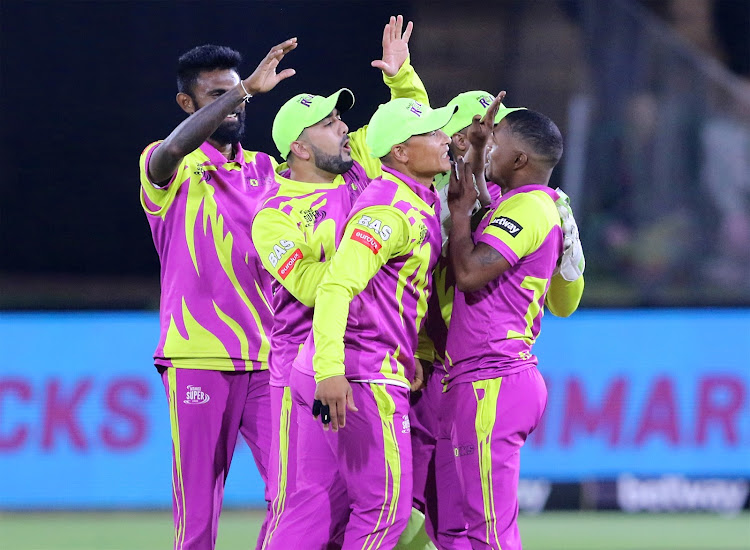 Eight times in the 10 match days in this year’s Mzansi Super League (MSL) the team at the top of the standings have been either the Nelson Mandela Bay Giants or the Paarl Rocks.

And so it was after the top-of-the-table clash between the teams at St George’s Park in Port Elizabeth on Wednesday. Times two.

The Giants suffered their first defeat‚ by 31 runs‚ in their six matches in the campaign at the hands of a Rocks side who have also lost only once.

But the home side managed to deny the visitors a bonus point — which means both are in first place on 19 points each.

Whatever happens in Thursday’s game between the Cape Town Blitz and the Durban Heat at Newlands‚ that can’t change.

Victory for the fourth-placed Blitz will put them two points behind the leaders‚ but they would claim the Tshwane Spartans’ third place.

The Heat — the only remaining winless team still in contention‚ who have had three of their five matches washed out — can’t get out of fifth spot even if they win.

The Rocks wasted chances to go top alone on Wednesday‚ which they would have done had they limited the Giants’ total to less than 133.

In the 19th over of their reply to the Rocks’ 166/7‚ the Giants slipped to 128/9 and looked in danger of conceding the bonus point.

But‚ in the same over‚ Hardus Viljoen couldn’t hold a difficult chance in his follow through and Tabraiz Shamsi lost another in the lights.

That put the Giants on 132/9‚ and the first ball of the next over — bowled by Junior Dala — slipped down the leg side to take the home side to the magic number.

The Blitz’ Janneman Malan‚ who is fifth among the runscorers with a best effort of 99 not out‚ and the Heat’s David Miller‚ who is eighth despite having had only two innings‚ look like the key batters at Newlands on Thursday.

Durban’s Keshav Maharaj‚ one of only 10 bowlers in the tournament who has an economy rate of less than 6.5 runs an over‚ and Cape Town Blitz’s Dale Steyn‚ who with Dala tops the wicket-taking lists with 10 strikes‚ seem the best options for keeping the runs down.

Another important stat will come from the stands‚ which have been conspicuously empty for the first two MSL games played at Newlands.

And that despite the fact that only seven of the 22 players in action were not internationals‚ and that stars like Quinton de Kock‚ Steyn and Chris Gayle were involved.

The Western Province Cricket Association (WPCA) board have won their arbitration case against Cricket South Africa (CSA).
Sport
2 years ago

Cricket SA (CSA) have accepted that they have lost their fight for control of the Western Province Cricket Association (WPCA) board.
Sport
2 years ago

Giants‚ Rocks show what MSL could be

For the Nelson Mandela Bay Giants‚ Wednesday’s game against the Paarl Rocks at St George’s Park is just another top of the table clash in the Mzansi ...
Sport
2 years ago