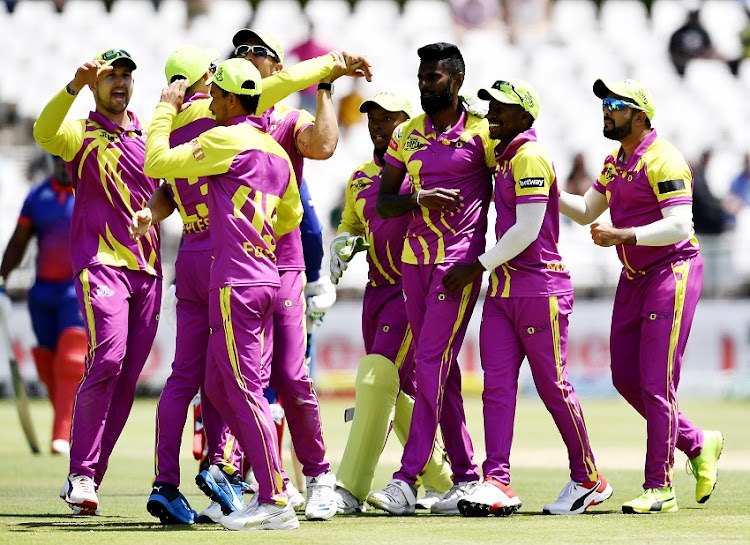 The Paarl Rocks have a funky purple and luminous yellow kit‚ and their performances are as bright as their colours after dethroning the Nelson Mandela Bay Giants in Port Elizabeth on Wednesday evening.

The 31-run win was a convincing one that could set the cat among the pigeons from a playoff perspective.

Paarl Rocks moved to the top of the log with 19 points from six matches‚ with a better net run-rate separating them from the Giants.

Thursday’s game between the Cape Town Blitz and the Durban Heat won’t have much of an impact from a log perspective.

It’s the Friday game between the Rocks and the Tshwane Spartans at SuperSport Park on Friday that’s going to be crucial for the visitors.

A win for the Rocks and another against the weak Jozi Stars will make their playoff berth reasonably safe.

However‚ that’s not something Rocks all-rounder Ferisco Adams is concerned with.

Adams bashed 23 from 12 and took 2//27 from his spell to help the Rocks collect their fourth win.

Adams‚ who’s done a fair bit of bench time‚ earned the man-of-the-match award for his efforts.

“We’re pleased with beating the Giants. They were the form team and they’re the team to beat. It’s good confidence for us.”

The weekend will be a critical one for the Spartans as they’re the one team who have beaten the Paarl Rocks and quite convincingly.

With the weather set fair and hot‚ rain may not be an issue like it was with the Durban Heat game.

However‚ a positive result is a necessity for a strong Tshwane Spartans team that has yet to play to its full potential.

Friday’s game presents an opportunity for both sides‚ not only from a log-leading perspective‚ but to state playoff intentions. All the teams have crossed the halfway mark and each point will count double than what it’s worth right now.