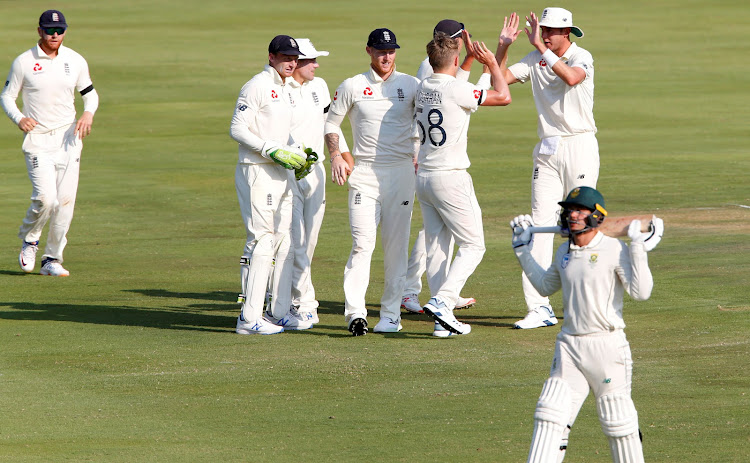 South Africa's Quinton de Kock walks after losing his wicket on day one of the first Test against England at SuperSport Park in Centurion on December 26, 2019.
Image: REUTERS/Rogan Ward

Quinton de  Kock scored a defiant 95 off 128 to help South Africa to a respectable score of 277/9 at stumps of day one of the Boxing Day Test at SuperSport Park in Centurion on Thursday.

When he arrived at the crease in the second session, South Africa were struggling on 97/4 after the early dismissals of Dean Elgar, first ball of the innings, Aiden Markram (20), Zubayr Hamza (39) and Rassie van der Dussen (6).

He immediately got on with the rebuilding job alongside Faf du Plessis, with whom he shared a partnership of 14 runs, before the South African skipper was removed by Stuart Broad having scored 29.

After Du Plessis’ dismissal, De Kock was joined by Dwaine Pretorius and they continued to keep the scoreboard ticking until their useful partnership of 87 was broken by Curran.

De Kock continued with Vernon Philander, which whom he shared a partnership of 47, until he was dismissed agonisingly five runs shy of his sixth Test century when he was caught behind by Jos Buttler off Curran.

Earlier in the day, it was utter frustration for the Proteas as they got off to a worst possible start with Elgar out without scoring while Markram, Hamza, Du Plessis, Pretorius managed to get starts but failed to convert them into bigger scores.

Philander ended the day unbeaten on 28 while the other contributors to the Proteas’ cause were Kagiso Rabada with 12 while Van der Dussen and Keshav Maharaj scored six each.

The key destroyer for England was the stocky left handed fast bowler Curran who returned with impressive figures of 4/57 and he was responsible for the demise of Markram, Van der Dussen, Pretorius and De Kock.

Other contributors to the wickets column for England were Broad with the three scalps of Hamza, Du Plessis and Rabada while Anderson, who was playing in his 150th Test match, accounted for Elgar and Jofra Archer removed Keshav Maharaj.

In what was a hot day in the capital, England bowlers Broad and all-rounder Ben Stokes were forced to leave the field at some stage to receive medical attention as they struggled with dehydration.

Philander and Anrich Nortje will continue to bat on the morning of day two and they are faced with the tough job of stretching South Africa’s lead further to make it difficult for England to come back.