STUMPS | Opening batting partnership still cause for concern for the Proteas 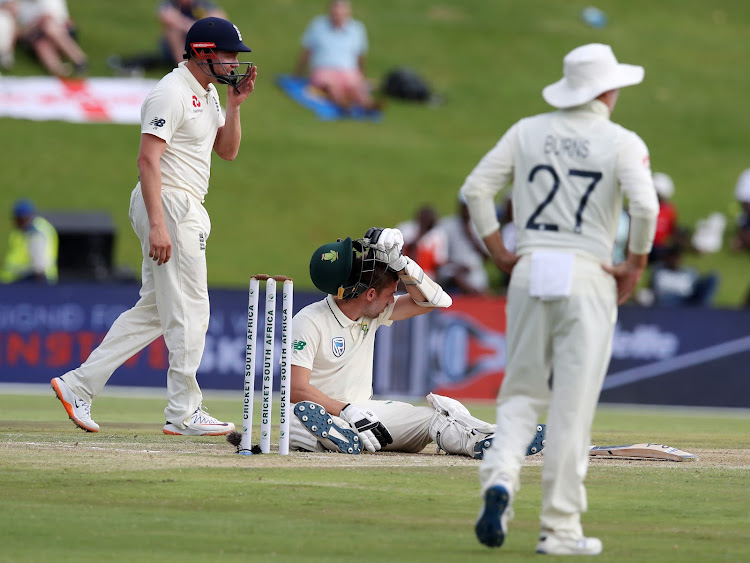 Anrich Nortje on the ground after ducking under a steep bouncer.
Image: Samuel Shivambu/BackpagePix

Unless they start operating in concert a question the South African openers may be confronted with in the not too distant future is if they can open an envelope, or indeed a browser.

Opening the innings is a pursuit Dean Elgar and Aiden Markram haven’t wholly grappled with in recent times.

In fact, the South African opening stand has failed to go past 50 in their last 14 innings, with 36 registering as the highest first wicket partnership in that period.

The only time the opening stand went past 50 this year was at their first attempt in the New Year’s Test against Pakistan at Newlands.

The pair has found interesting ways of parting and on Thursday, Elgar again yielded to the unconventional when he managed to get caught down the leg side off a James Anderson’s loosener, which also happened to be the first ball of the match.

Naturally, for someone who had played in 149 Tests before this one, Anderson celebrated Elgar’s capture, knowing full well the game demands you take the rough with the smooth.

To be fair, South Africa were one down before the Anderson charged in to bowl the first ball.

The start was delayed after renowned photo journalist Christiaan Kotze slipped on the covers rolled up beyond the boundary in front of the West Lane, or Pavilion End.

The problem was that Kotze went down in front of the sight screen and seriously injured the ACL in his right knee meant he could not physically apply the urgency his brain demanded he action.

Ever the professional and driven by the need to blend into the background he tried to crawl away from the sight screen and the batsman’s line of sight.

By now however, everyone inside the stadium, not to mention the millions watching on television and online platforms were watching his low level escape.

“All I wanted to do was get out of the way,” said Kotze with his customary giggle.

Members of the England backroom staff helped get him onto a stretcher and the medical facilities inside the ground where his injury was attend to.

Thankfully for Kotze his willing and able wife picked up where he left off.

His misfortune proved a portent of what was to come as first Elgar and then Markram departed cheaply.

Markram got a bit of a start but he finds ways of getting out.

This time he tried to whip Sam Curran off his pads only allowing Jonny Bairstow to take a sharp catch at a short midwicket.

At 111 for five the Proteas looked in real strife.

What is also apparent is that the opening stand is perhaps the window to a wider malaise in the South African batting.

Only four centuries have been scored by Proteas’ batsmen this calendar year. Elgar (160), Quinton de Kock 129, 111 and Faf du Plessis 103 reached the milestone.

De Kock looked on course for a third ton but he was winkled out by the impressive Curran, who bowled with loads of nagging intent from the Hennops River End.

De Kock top scored with 95 in a South African first innings that yielded to the persistence of Curran and Co.

Five batsmen got themselves in and apart from De Kock failed to deliver something of substance.

Zubayr Hamza in particular, will feel for all the poise and pose he showed, pluck and persistence would have served him better.

England captain Joe Root won the toss and elected to bowl in the first test against South Africa at Centurion Park in Pretoria on Boxing Day.
Sport
2 years ago

England took a South African wicket with the opening delivery of their test series on Thursday and added two more relatively quickly to leave their ...
Sport
2 years ago