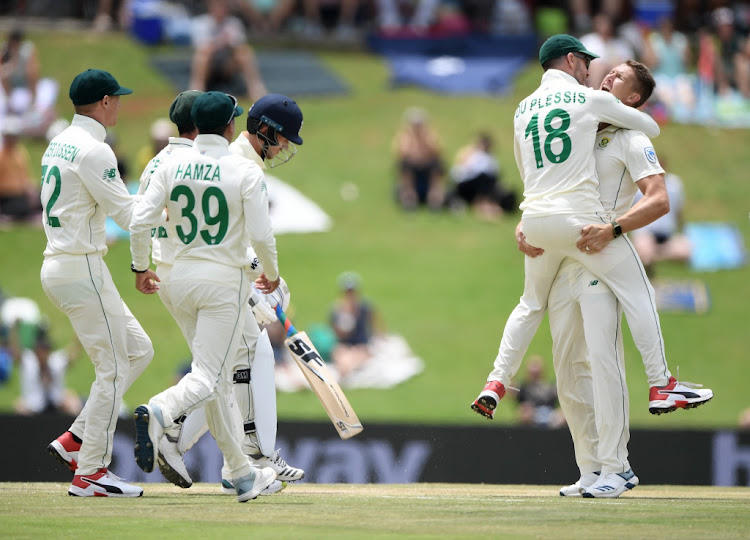 SA captain Faf du Plessis has credited their impressive 107 runs win over England in the Boxing Day Test at SuperSport Park in Centurion to collective effort.

The bowling attack skittled England for 181 with Vernon Philander achieving figures of 4/16 and Quinton de Kock sparkling with the bat by scoring 95 to give SA a first innings lead of 103.

In the second innings, Rassie van der Dussen and Anrich Nortje built a partnership of 91 while Kagiso Rabada and Nortje dominated with ball to return with four and three wickets each as England fell short of their target.

“In the team we don’t have a lot of superstars, you can say that guys like KG (Rabada) and Vern (Philander) are superstars in their own right, but as a team we take a lot more where everyone contributes,” said Du Plessis after the match on Sunday.

“Small things like Nortje scoring 40 runs with the bat are more pleasing and those are things that make the team from a collective point of view. Our bowling unit was exceptional because everyone put their hand up to make contributions.

“I thought the wicket played at its best because of the sun not being there and the wicket not being dry and needed us to be on top of our game. I thought our bowlers were exceptional.”

In both innings, the South African top order failed to fire on all cylinders with Zubayr Hamza the top scorer with 39 in the first innings and Du Plessis agreed that they have to improve.

“As the top order we need to score the bulk of the runs and that’s where we need to improve on. Saturday and Sunday were probably the best two days for batting but the way Quinny (De Kock) batted in the first innings is why he is such a good player.

South Africa comprehensively thrashed England by 107 runs in the Boxing Day Test on Sunday afternoon with a day and a session to spare in Centurion ...
Sport
2 years ago

“He is one of the few players in the world who can come in and completely change the innings of the game and we are fortunate to have him. Positions six and seven is where he has been so good for us in this Test team. The big thing that our coaching staff has done was to make sure that the lower order contributes.

“A lot of the times Test matches are won and lost there, that’s why the partnership of Rassie and Nortje was 90 odd runs and we won the match by about 107 runs.”

Du Plessis also praised Nortje for his performances after he struggled during the tour to India recently.

“Every seam bowler will find it tough going to India for the first time, it is not a place where seam bowlers generally start off well. You need to have a lot of experience to know the conditions there, someone like Dale Steyn struggled in India but after a few tours and understanding the conditions he got used to it.

“Nortje has pace and bounce and he understands the South African conditions, what impressed me was his control which was very good for long spells. We need one or two bowlers to raise their hands, there are going to be a few spots open with Vern (Philander) leaving the Test team. We need a fast bowling group that we can rely on.”

SA’s opening batsman Aiden Markram has been ruled out of the remainder of the Test series against England after sustaining a finger injury.
Sport
2 years ago

The second day of the Boxing Day Test in Centurion on Friday ended in controversy after England fast bowler Jofra Archer flirted with a ban for ...
Sport
2 years ago