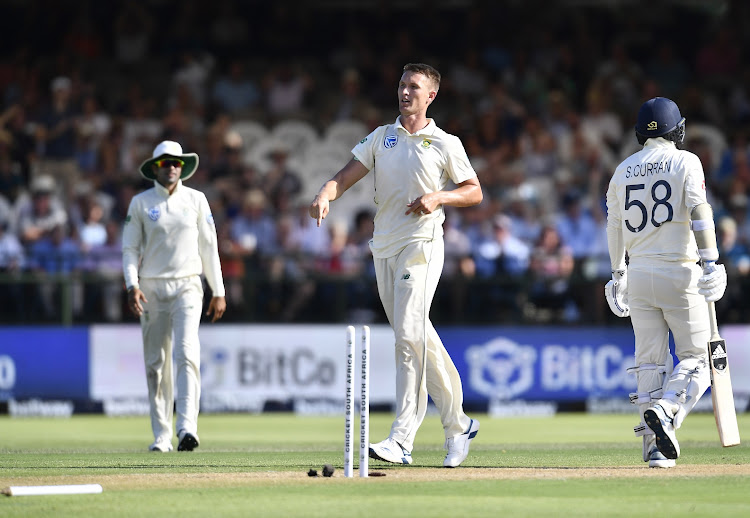 Dwaine Pretorius of South Africa celebrate the wicket of Sam Curran of England on day one of the second Test at Newlands on Friday.
Image: Ashley Vlotman/Gallo Images

In the search for a blockbusting all-rounder, South Africa have currently settled on one who is living his Test dream. That happens to be Dwaine Pretorius.

There's an understanding that not every all-rounder will hit Jacques Kallis batting, bowling or catching high notes or even come close to Ben Stokes' latter white hot (or red-haired) potency.

It's a case of playing the cards that are dealt you and in Pretorius, South Africa have the slow and steady to the fast bowlers' fire and brimstone.

Even then, the joy and the honour of playing Test cricket was enough for Pretorius to turn his back on a Kolpak contract.

“I'm just glad to be in Test cricket. It's a dream come true for me,” Pretorius said.

“I'm a kid from Rustenburg who is playing Test cricket and the New Year's Test against England at Newlands. It's a massive dream come true and that's why I decided not to pursue that other opportunity.

“I spoke to Mike Haysman about it on SuperSport, so I'm sure everyone will be able to get a big picture about that. I'm just glad to be here and glad to be contributing to the team.”

He's only two Tests into his career, but Pretorius is showing a willingness to learn and very quickly.

There's plenty of cricketing sounding boards for him like Vernon Philander, who bowls at pretty much the same speed as Pretorius, but with a bit more skill, movement and Test wickets.

It's an environment that Pretorius is enjoying, especially with the coaching staff around him.

“Vern, I can learn so much from Vern. He's always there and always asking the right questions of the batters,” Pretorius said.

“It's really cool being in an environment where Jacques Kallis is your batting consultant, Mark Boucher is one of your coaches and Paul Harris is your spin consultant.

“There's Charl Langeveldt who has played international cricket. There's so much experience you can draw on. At the moment, everyone is feeding off that and I really feel they're having a positive impact on everyone in the team.

“There's high standards in the team and there's no places to hide. It's a tough school in the changing room but the guys are responding to it well.”

Having limited England to 262/9 on losing the toss, Pretorius feels SA may have kept the tourists to under what they should have achieved.

However, he's also aware that the Proteas still have to bat to gauge the true nature of what has been a well-behaved surface so far.

“I think we did quite well. I think this wicket is better than the SuperSport Park wicket to bat on. We stuck to our disciplines quite well and I really think it was a good day for us. We can take that and be positive on day two,” Pretorius said.

“They had a lot of guys who got in and out at the wrong time for them. They had a lot of 30s, so looking at that wicket, even though I haven't played much Test cricket, I think 350 is a par-ish score.

“I think at the moment, they're 70 runs short. It was hard work taking wickets, but our disciplines allowed us to strike at the right times.”

England happy to bat out day one, but only just

The fact that England weren’t bowled out on the first day represented a qualified success for them, but a first day total of 262/9 on day one of the ...
Sport
1 year ago

Jofra Archer touch and go for England in Newlands Test

England captain Joe Root appeared to resign himself to the possibility of not having ultra-fast bowler Jofra Archer for Friday's second Test at ...
Sport
1 year ago