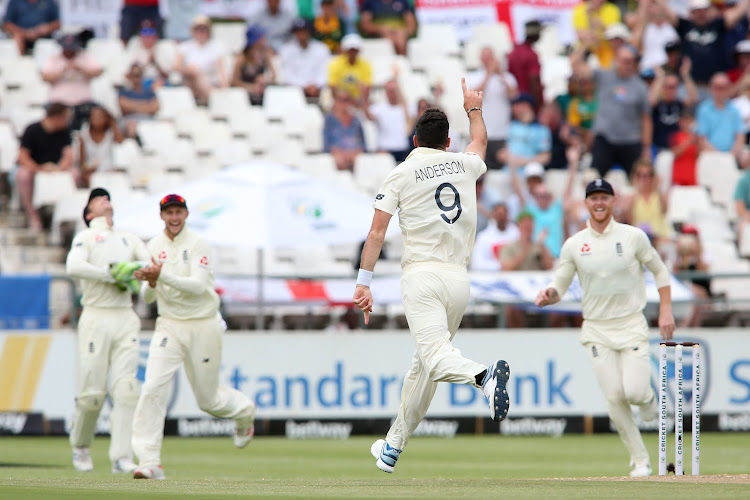 The wait between James Anderson's 27th and 28th Test five-wicket haul was only six matches.

However‚ England's record wicket-taker has missed a fair bit of Test cricket because of a calf strain.

The wait was worth it as the last time Anderson took a five-wicket haul‚ which was against the West Indies in Barbados in January last year‚ England were soundly beaten.

They're still some way away from winning this fourth day‚ but the demolition job Anderson performed on South Africa's tail played a big role.

That and Ben Stokes's five catches made sure England's slip cordon was close to impregnable.

The 37-year-old‚ who went past Sir Ian Botham's record of most five-wicket hauls by an England bowler‚ said he missed the heat and thrill of Test combat.

“I sat down in the dressing room at the end of the second day‚ feeling like this is what I missed about the game.

"A proper hard day of Test cricket and proper graft.

"There was the battle with Dean Elgar and Rassie van der Dussen when they put their partnership together.

"That's why I still want to play Test cricket.

"I still get a buzz coming off the field after that kind of day we had‚” Anderson said.

“It was pretty hot and sweaty‚ but you know you've put a shift in. The hard work we put in puts the frustration I had over the past four months aside and makes things a bit sweeter.”

There's still a Test to be won and the last time Anderson took a five/fer at this ground on the same Test match occasion back in 2010‚ England still had to fight tooth and nail for a famous draw with the last pair standing.

The current wicket isn't as flat as the 2010 one‚ but England have played the patience game better than South Africa even though the wicket flattened out.

Anderson was happy to have put his feet up for 79 overs after delivering 19 good ones but hopes the surface will deteriorate over the next two days of combat.

“We're hoping for the wicket to deteriorate as the game goes on.

"We've got some work to do on day four to build up another partnership.

"If we bat well‚ that first session and later‚ we can dictate terms later in the day.

"We have to play it by ear in terms of how the wicket is playing in terms of when and if we can make a declaration‚” Anderson said.

A beer snake at the Melbourne Cricket Ground will most probably get you kicked out of the ground, but not at Newlands.
Sport
1 year ago