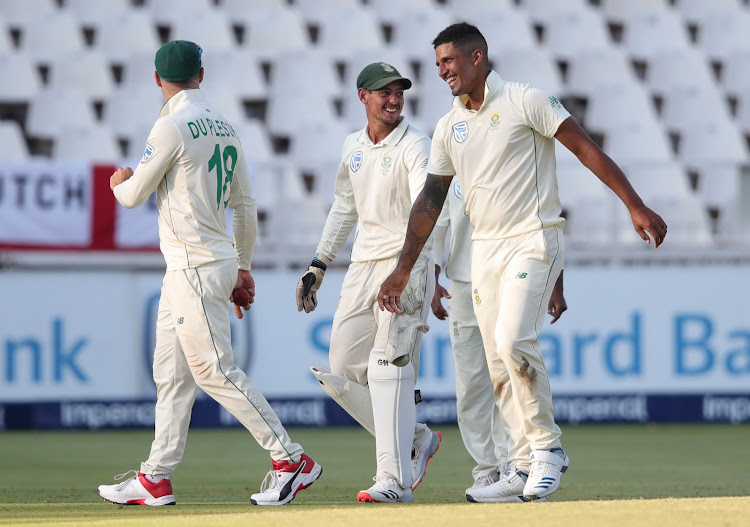 Despite England’s second innings collapse‚ the visitors are still in the pound seats to win the fourth Test match and wrap up a three-one series win over South Africa.

They are still in total command with a lead of 465 and two days in which to manufacture the South African demise but by opting not to enforce the follow-on and collapsing in their second innings to 248 all out on day three‚ they gave the hosts a small window to burgle a win.

However‚ captain Joe Root dropped anchor and helped steer them to safety in the late afternoon as South Africa’s prospects receded with every run added to the scoreboard.

To even get vaguely close will require a supreme batting effort against England’s five-pronged seam attack. On a deteriorating pitch the tourists also have the option of deploying the spin of Joe Denly and captain Root.

The South Africans are staring down both barrels and they are now almost certain to lose their third straight Test series after crashing to Sri Lanka and India last year.

As expected England opted not to enforce the follow on after they dismissed South Africa for 183 in their first innings. The 217-run deficit was considerable and such was their position of strength the tourists eschewed the opportunity to make the hosts bat again.

England’s openers started well enough by posting another 50-stand and they did it with relative ease. To be fair‚ the South African attack suffered an early setback when Vernon Philander was forced to leave the field with a hamstring injury halfway through his second over.

He felt discomfort in his right hamstring and left the field for an evaluation. He was then sent for a scan to assess the extent of the injury.

It is unlikely he will bowl again in this innings which means his highly decorated Test career will to an end with the deeply unpalatable figures of 1.3-1-0.

He took two for 50 in the first innings.

England went about their business with urgency and as a result they lost wickets.

Although a little expensive due to the fuller length at which he preferred to operate‚ Anrich Nortje also got in on the act.

Ollie Pope’s rash flash handed Quinton de Kock his 200th dismissal in Test cricket. It took him just 46 matches the reach the milestone‚ the fewest in Test cricket. Australia’s Adam Gilchrist did it in one more.

Ben Stokes looked in fine touch until he was caught in the slips.

Like Pope‚ Jos Buttler’s flashing vertical blade was also his undoing as England stuttered slightly. That dismissal and the manner in which it occurred may well mean the end of his Test career.

Star England all rounder Ben Stokes may find himself in the crosshairs of the International Cricket Council (ICC) following an angry exchange with a ...
Sport
2 years ago

England all-rounder Ben Stokes was fined and given a demerit point by the International Cricket Council (ICC) on Saturday after a foul-mouthed row ...
Sport
2 years ago