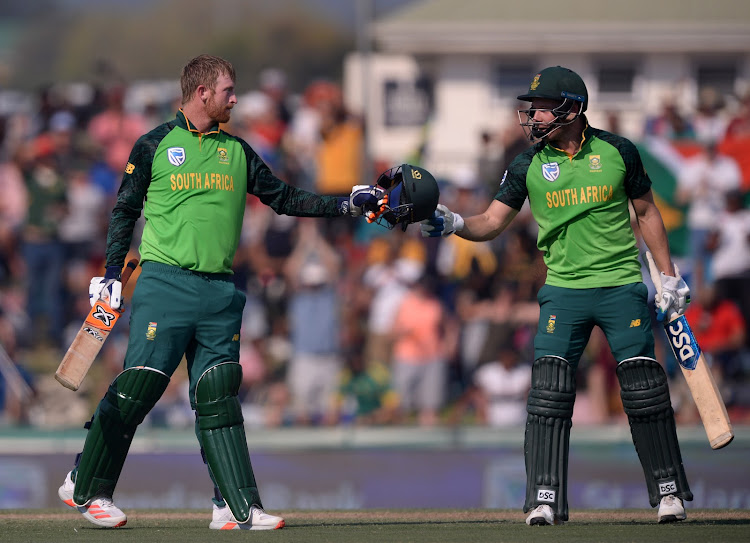 Heinrich Klaasen of South Africa celebrates his century with teammate David Miller during the 2020 Momentum One Day International Series game between South Africa and Australia at Boland Park in Paarl on 29 February 2020.
Image: © Ryan Wilkisky/BackpagePix

Heinrich Klaasen’s unbeaten 123 and Lungi Ngidi’s three wickets were at the heart of South Africa’s 74-run win in the first ODI in Paarl.

Having won the toss and batted first, SA rebuilt from losing a wicket off the first ball of the game to make 291/7. Australia were bowled out for 217 in 45.1 overs.

Barring the embarrassing T20 series against Australia, SA have start series well this summer, only for them to let it slip in the latter games of the series.

It was a welcome win for the hosts, but they’ll know one victory doesn’t a series triumph maketh.

Australia’s openers couldn’t provide the fast T20 series starts and when they lost Steven Smith (76) with the score on 174/5 after 34.1 overs; Australia fell by the wayside quickly.

The former then picked out Ngidi at long on off Keshav Maharaj (1/48) to leave Australia slightly struggling at 133/3 in the 27th overs.

There was more urgency in the 41-run, fourth wicket alliance between Mitchell Marsh (16) and Smith as South Africa had dried up the boundaries.

When Marsh’s off-stump was disturbed by Ngidi, Smith followed soon when he was trapped in front by Anrich Nortje (2/39).

Alex Carey (five) and D’Arcy Short (16) were picked off by Tabraiz Shamsi (2/45). Mitchell Starc (five) was run out while Pat Cummins (six) and Josh Hazlewood (one) offered little resistance to Andile Phehlukwayo (1/52) and Nortje.

Malan, younger brother of Test opener Pieter, became the first batsman to be dismissed with the very first ball of the game on debut when he was trapped in front.

De Kock struggled for fluency in the 6.2 overs he batted before edging Hazlewood to Carey while Bavuma looked good before he chopped the impressive Cummins on.

Debutant Kyle Verreynne (48) and Klaasen consolidated as Australia’s bowlers lost the ability to move the ball in the air in the searing heat.

The fourth-wicket stand between Verreynne and Klaasen was worth 78 before the former picked out Marsh at square leg off Cummins with his 50 in sight.

The underachieving, underperforming David Miller (64) reined in his attacking instincts in his critical 149-run stand with Klaasen spanned nearly the rest of the innings.

The 100 partnership came up in 95 balls while Klaasen’s ton came up off 106 balls. The acceleration South Africa looked for didn’t quite come as Phehlukwayo (nought) and Maharaj (two) didn’t quite bother the scorers.