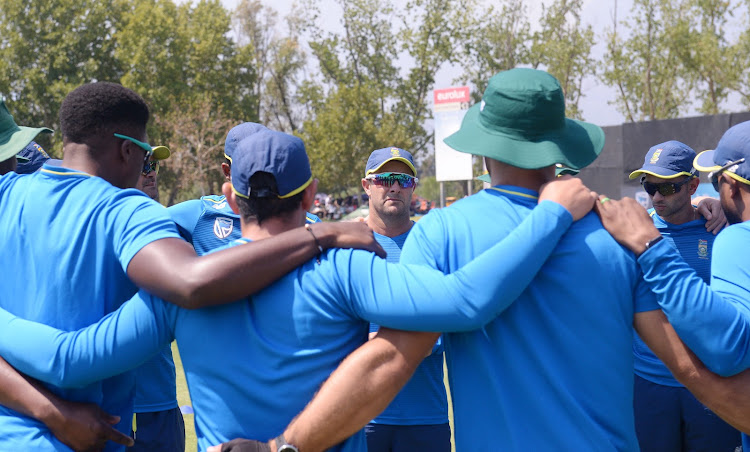 Coach Mark Boucher in a team huddle with his team.
Image: Ryan Wilkisky/BackpagePix

Mark Boucher says the Proteas medical staff have plans in place to secure the team from the risk of the Coronavirus (COVID-19) outbreak that has left governments around the world scrambling to contain it.

The Proteas departed for India via Dubai on Sunday and they are scheduled to play three ODIs in the cities of Dharamshala‚ Lucknow and Kolkata from March 12 - 18.

Boucher admitted that the virus is a serious concern but they have been adequately briefed and assured their lives would not be at risk.

“We have the medical staff and like in the past where there was a security concern‚ we give that to them and they come up with recommendations.

"If they feel it is too dangerous‚ they pull us out and this is no different‚” the SA coach said.

“We had a briefing at the weekend about the virus that has been going on and obviously it’s a major concern around the world.

"But we don’t know medicine like they do‚ we have a medical staff to look after that.

"We have taken their recommendations and we trust that they will put stuff in place that will work for us.”

This past weekend the English Premier League and English Football League (EFL) cancelled pre-match handshakes between players and officials while different sporting events in Italy were either cancelled of played behind closed doors.

“With regards to handshakes and stuff like that‚ it is a concern and we will do the same if it comes to that‚" Boucher said.

"I think it is just a way of trying to stop anything from happening to our guys and it is out of respect for the players around you not to pass something that you might have.”

In a statement issued on Friday‚ Cricket South Africa (CSA) said they have been in constant contact with the Board of Control for Cricket in India (BCCI)‚ the South African embassy in India‚ the Indian government‚ and security and risk experts.

“The Proteas will be traveling to India via Dubai and landing and spending a day in Delhi‚ then proceeding to play in Dharamshala‚ Lucknow and Kolkata.

"None of the playing venues have recorded positive cases and travel between these cities will be via chartered flights reducing the risk even further.

"The risks in Dubai and Delhi are considered low.

"While the risk remains low‚ precautionary measures are necessary because of the highly infectious nature of the disease.

"The team has been appraised of hygiene precautions‚ avoidance measures‚ and symptom recognition in addition to being provided with travel kits‚” said CSA.

The South Africans beat Australia by six wickets in Potchefstroom on Saturday to complete a 3-0 series whitewash over the visitors.

Restless India champing at the bit for women's T20 decider

Melbourne — India will have energy to burn when they take on Australia in the Women’s Twenty20 World Cup decider, after their semifinal against ...
Sport
2 years ago

George Linde may be a one-Test wonder, but that singular experience of India last year holds him in good stead for this week's three-match ODI series ...
Sport
2 years ago