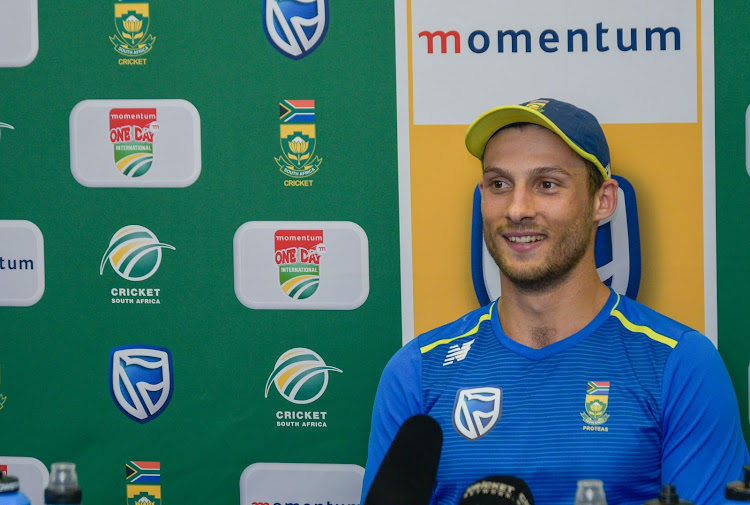 Janneman Malan is looking good to nail down a regular place in the ODI squad.
Image: Frikkie Kapp/BackpagePix

Emerging Proteas batsman Janneman Malan may get an extended run at the top of the batting order in the three-match ODI series against India in Dharamshala on Thursday morning.

Malan‚ who was handed his debut in the first of three matches against Australia and returned with 152 runs in his three innings as SA romped to a 3-0 series win‚ is expected to open the batting with captain Quinton de Kock on the subcontinent.

Malan played as opening partner to De Kock in the whitewash of Australia recently and coach Mark Boucher is expected to continue with that combination.

His chances‚ of at least opening the batting in the first match‚ have been increased by the fact that Reeza Hendricks was dropped for the tour of India and Temba Bavuma is not yet fully fit.

“It is good that Janneman has put his hand up and is one of the younger players in the squad who have played good cricket.

"Certainly he has taken his chance.

"I would like to play 15 guys in the starting line-up but I can’t do that. You have to select the best players for the conditions‚” said Boucher.

Malan was not in the original squad for the tour to India but he was later included after his impressive performances against Australia that included a maiden century in his second match in Bloemfontein.

“We selected the squad for India before the first ODI against Australia.

"With Temba not 100 percent fit yet‚ we had a discussion with him and decided to pull him out of the series against Australia with the recommendation of the medical staff.

"They also recommended that he (Bavuma) miss the first match against India and we needed cover for him. Temba owns his spot in the ODI squad and if we get him back‚ he will be in the side.”

Boucher also indicated that bowlers would have to find the right areas during the powerplay as they were exposed by Australia.

“You always want to grow‚ our bowling in the powerplays wasn’t fantastic during the series against Australia.

"But we showed on conditions that were conducive to seam bowling in the third match in Potch that we can bowl well.

"We probably went for too many runs in the first two games during the powerplay but we are always looking to grow.

"It is something that we have spoken about and hopefully we will get it right in India.”

Finding a place in the batting line-up for former captain Faf du Plessis in SA's three-match ODI series against India has given coach Mark Boucher a ...
Sport
1 year ago

Mark Boucher says the Proteas medical staff have plans in place to secure the team from the risk of the Coronaviras (COVID-19) outbreak that has left ...
Sport
1 year ago

New South Africa captain Quinton de Kock has welcomed the return to the One Day International squad of his predecessor Faf du Plessis as they prepare ...
Sport
1 year ago
Next Article