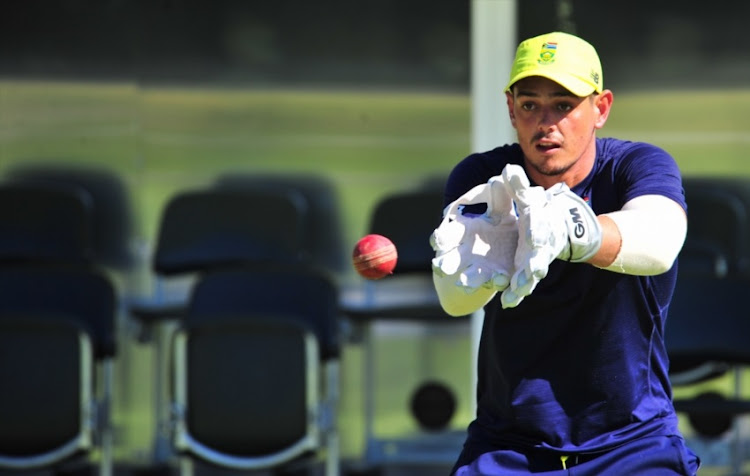 Quinton de Kock was appointed South Africa limited overs captain at the beginning of the year and will be determined to lead the Proteas to glory at the 2020 Twenty Cricket World Cup later this year in Australia is the coronavirus is contained.
Image: Grant Pitcher/Gallo Images

The stylish wicketkeeper-batsman‚ who is pleasing to the eye with his glove work as he is with bat in hand‚ said he has found it mentally challenging and hard to maintain fitness from the comfort of his confined space at home as South Africa enters its fifth week under lockdown.

“Staying fit is one thing during this lockdown....but the problem is trying to stay fit‚” said the 27-year-old Johannesburg-born star.

“It’s a little bit difficult and obviously the lockdown takes a toll on you mentally.

“You actually (want) to get up and do stuff‚ that’s what I have found the longer we have been staying in this lockdown thing.

“Once everything gets lifted and we can get out and get some running done and all that‚ I am sure my fitness will get back and so will everyone else’s.”

De Kock reflected on his contribution during the four-match Test series defeat against England.

“I think I have played decently you know‚” said the former Lions batting mainstay of his contribution as the Proteas were trounced 3-1 by the tourists.

In eight innings De Kock posted scores of 95‚ 34‚ 20‚ 50‚ 63‚ 3‚ 76 and 39 – his runs in the opening Boxing Day Test in Centurion central to the Proteas win before the team folded in Port Elizabeth‚ Cape Town and Johannesburg.

He said he was left kicking himself in frustration after making good starts but failing to convert.

“There was a time when I was starting to get grumpy and when I was not converting all my starts to big scores‚ especially during the Test matches against England. But I still don’t think it was bad‚” said De Kock.

“I still want to get better and obviously start to score big hundreds for the team and I think that is the most important thing to try and get going now.”

The soft-spoken star‚ who plays for the Centurion-based Titans‚ said other than the limited exercise at home all he does is watch movies and series when he is not video calling his franchise and national team teammates.

“I have faced-timed quite a lot of the guys. We are good friends‚ so every now and again we face-time each and see what is happening.

“It is just to chat to everyone to find out what they are getting up and just to get in contact with the guys.”

Cricket South Africa (CSA) suspended cricket for 60 days on March 16 and have had to terminate their domestic season prematurely although there were only a handful of rounds remaining to complete the campaign.

Proteas limited-overs captain Quinton de Kock says while the ODIs are still a work in progress‚ he draws confidence from the capabilities of his T20 ...
Sport
2 years ago