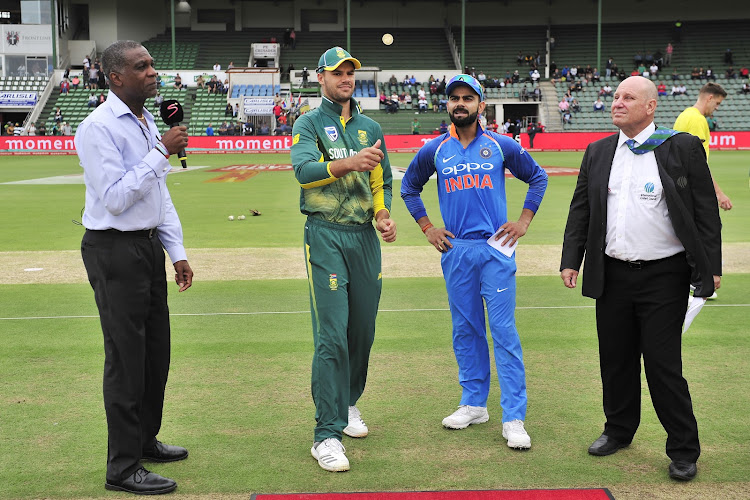 Aiden Markram Captain of the Proteas does the coin toss during the 2018 Momentum One Day International Series game between South Africa and India at St Georges Park, Port Elizabeth on 13 February 2018.
Image: Deryck Foster/BackpagePix

Proteas star batsman Aiden Markram has revealed that self-doubt crept into his mind during a terrible loss of form and a period on the sidelines due to injury.

The Centurion-born star burst into the consciousness of Test cricket after scoring two hundreds in his first three matches since his debut against Bangladesh in 2017.

But the 25-year-old has not lifted his bat to the heavens to salute a Test century since March 2018 and has been nowhere near a half-century in his last seven innings.

The right-handed opener’s loss of form was compounded by a silly injury he picked up after punching against the wall during the tour of India in October as the frustration got the better of him after he was dismissed for successive ducks.

He recovered in time for the home summer visit of England but fractured a left hand finger while bating on day two of the opening Boxing Day Test in Centurion.

“It was certainly very frustrating to miss quite a bit of the season but now I feel at a hundred percent. The injuries have definitely healed and subsided‚ which I’m really grateful for‚” said Markram‚ the first and only South African captain to win a World Cup after leading the Under-19s to 2014 glory.

Markram missed out on the remainder of the England series as required surgery sidelined him for six weeks‚ but he came back in March with two hundreds in six List-A matches for the Titans to remind his detractors and the national selectors of his abilities.

With fans calling for him to be axed due to poor form as he got a rude awakening of being an international cricketer‚ Markram revealed that he started to doubt his abilities.

“I have never thought of giving up before but having said that I’ve certainly doubted myself and doubted my abilities‚ especially when you are out of form.

“At the top level of the game you are just a few bad knocks away from people wanting you out of the team and people stop backing you and things like that.

“So yeah‚ I have never thought of giving up but I’ve certainly doubted myself‚ and doubted myself quite a bit this last year since it was quite a struggle for me‚” said Markram.

“Ja‚ it is a tough space to be in but it also comes with the territory and if you want to be a top performer at the highest level you have got to find ways to deal with it.”

Cricket in SA and across the world has been floored by the coronavirus pandemic and Markram said time away from the middle has helped him configure his game.

“In this time off and during the injuries‚ there were a few technical things I did identify‚” said Markram‚ who also shared his frame of mind during what was a disappointing summer for him.

“Probably the most challenging part about being injured is not letting your mind run off.

“Certainly this time off has been nice to reflect and try come up with ways to not blow it out of proportion in your own mind and sort get on with what needs to be done.

“I think when you have got so much time on your hands you tend to not just overthink things‚ but you delve deeper into things which is often quite unnecessary‚” said Markram.