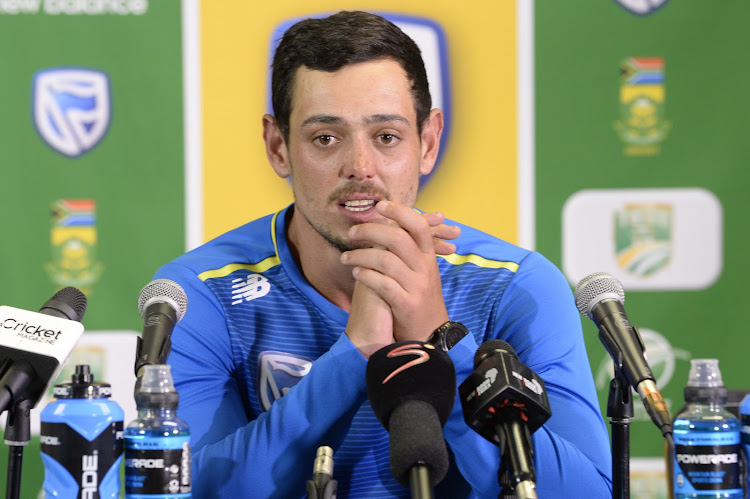 Quinton de Kock says he does not need the stress that comes with captaining the Test team.
Image: Lee Warren/Gallo Images

SA men’s cricketer of the year Quinton de Kock has revealed why he was stood down as captain of the Test team and said the pressure that comes with the captaincy role in the longer format of the game was just too much for him to handle.

“I think the reality is that it is just too much for me to handle and I know that‚ and I realised that‚” said De Kock after being voted as SA men’s cricketer of the year at the Cricket South Africa (CSA) virtual awards ceremony at the weekend.

De Kock also bagged the Test cricketer of the year and the men’s player’s player of the year awards at an event that was held without the usual glitz and glamour synonymous with the traditional gala due to Covid-19.

The 27-year-old took over the captaincy role from Faf du Plessis at the end of the disastrous Test series defeat against England in January.

Cricket South Africa (CSA) has taken their first steps towards resolving their sponsorship crisis after getting betting company Betway on board.
Sport
2 years ago

“When it comes to Test cricket I don’t need all that stress. I could see it from a mile away that I didn’t need that on top of my shoulders you know.

“We had a very informal chat with (team director) Mark Boucher‚ very informal I must tell you‚ and I was actually pretty pleased that it came up. I’m pretty happy with the way they went about it‚” said De Kock.

CSA director of cricket Graeme Smith relieved De Kock of the Test captaincy in April in a bid to keep the star wicketkeeper batsman fresh‚ but he retained the stylish left-hander as captain of the limited-overs side.

Laura Wolvaardt and Quinton de Kock, the star performers for their respective national cricket teams who have had contrasting performances, ...
Sport
2 years ago

The soft-spoken Johannesburg-born star was a shining light with his performances with glove and bat during a dark period for the Proteas as they endured a worst ever season.

“I think if I was to rate myself at the moment especially over the last season I think I was only at about six and half (out of 10) to be honest.

“I think I had too many starts and not converted enough. If I have to be honest I think six and half. I’d love to convert a lot of my starts into bigger runs so yeah that’s mainly about it.”

Cricket SA's board this week changed the terms of reference of the yet to be delivered forensic investigation into its suspended CEO, Thabang Moroe.
Sport
2 years ago