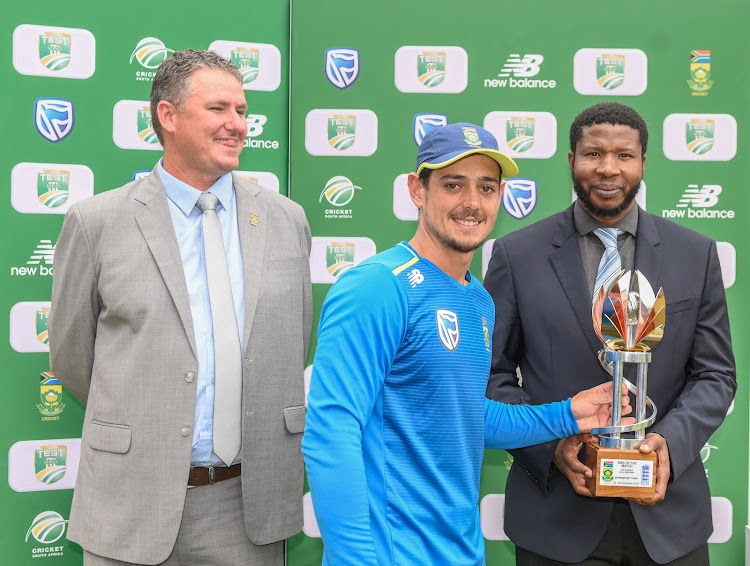 A day after Ethy Mbhalati's explosive allegations of institutionalised racism at SuperSport Park‚ the Northerns Cricket Union (NCU) and the Titans have reached out to their former player and offered to meet him to address the issues of racial discrimination that were alleged by the former fast bowler.

Mbhalati told TimesLIVE in a no-holds barred exclusive interview on Tuesday that his former team has shattered the careers of many highly promising black cricketers through a system he said was designed to frustrate them.

The NCU and the Titans said on Wednesday they are willing to meet Mbhalati to discuss the issues he raised.

“Given Ethy's long-standing record and contributions at the Titans‚ we would like to reach out to him and begin a dialogue to address the past issues he has raised in order to ensure that we maintain the good relationship we've shared with him and all retired Titans legends‚ as they continue to inspire future Titans players through the successful careers they've had at SuperSport Park‚” said NCU and Titans interim chief executive Pierre Joubert.

“Ethy Mbhalati was an outstanding cricketer and is considered a legend by many in these parts. His playing career‚ which spanned 14 years‚ he took 594 wickets in all formats. We will forever be grateful for his contribution to the franchise.

They called me a monkey: ex-player claims shocking racism in SA cricket

“During the 2013/2014 season he was awarded a benefit year by the franchise for his loyal service. Ethy brought the curtain down on his time with Titans in the 2015/16 season and while playing his last season for the Sky Blues‚ he was one of the top salary earners for the franchise.”

When TimesLIVE contacted Mbalathi on Wednesday afternoon to inform him of the latest developments‚ the former fast bowler said he's consulting on whether to meet with the NCU and the Titans management or not.

While willing to meet Mbhalati to discuss the issues he raised‚ Joubert insisted that the NCU and the Titans management never received official complaints of racism and discrimination from the former player.

“We are not aware of any official complaints of racism or discrimination at the franchise during his time‚" he said.

"Please refer to our press release last week where we condemn any and all acts of discrimination. We strive to provide equal opportunities to all our players and staff and treat everyone equally.

Ex-Proteas‚ domestic players and coaches rally behind Ngidi: 'Can there be equal treatment‚ please?'

A group of former Proteas‚ domestic players and coaches have come together in support of paceman Lungi Ngidi after his stance on the Black Lives ...
Sport
1 year ago

“Furthermore‚ the Titans franchise and NCU takes issues around unethical behaviour and discrimination of any kind extremely serious‚ as a progressive and a very diverse franchise‚ we have appropriate and adequate structures in place to handle such matters with vigour and objectivity.”

“We have never had any complaints of racism in the past or in the present‚" Siko said.

"Players and staff are aware of the processes they need to go through to lay a complaint. Our board has a Transformation and Ethics Committee‚ which is responsible for dealing with such matters should they arise.

“The structure through the committee was set up to ensure that we have a progressive transition as we diversify and address any cricket-related inequalities within the franchise‚ promote diversity as we continuously drive awareness. We stand firm on our Transformation values‚ that “we are stronger together.

“Let me conclude by saying we are continually striving and endeavouring in all aspects and are encouraged by how far we have come. We will continue to strive to be an example and be at the forefront of the battle against discrimination‚ we will continue to offer our voice and give a platform to those that need to be heard.”

Mbhalati also revealed that he played for a number of years at the Titans without a contract and only started to earn good money towards the end of his career.

“I played for the Titans without a contract and we used to call it a pay as you go because you got paid when you played with a basic salary of about a R1‚000.

"They used to deduct UIF and I was left with about R900‚ but I was just happy to play and at least got match fees.

“They were forced to increase my contract because other teams were chasing me and I remember that I had a white agent I only saw when he came to negotiate my contract...... he never looked after me‚” said Mbhalati.

Mbhalati added that he never received enough support from the NCU and the Titans during his benefit year.

“In my benefit year to celebrate 10 years at the Titans‚ Limpopo cricket are the ones who did most of the things to organise everything and get me sponsors‚" he said.

"Only a few guys I was playing with supported me for that benefit year. Lonwabo Tsotsobe came to support me and he was not even at the Titans. As for my team-mates‚ it was not all of them.

"It was only a few I was close to who came to the dinner. Not even one board member from the Titans came to support me.”

Cricket South Africa may be accepting of the Black Lives Matter movement‚ but they also need to brace themselves for uncomfortable truths that may ...
Sport
1 year ago