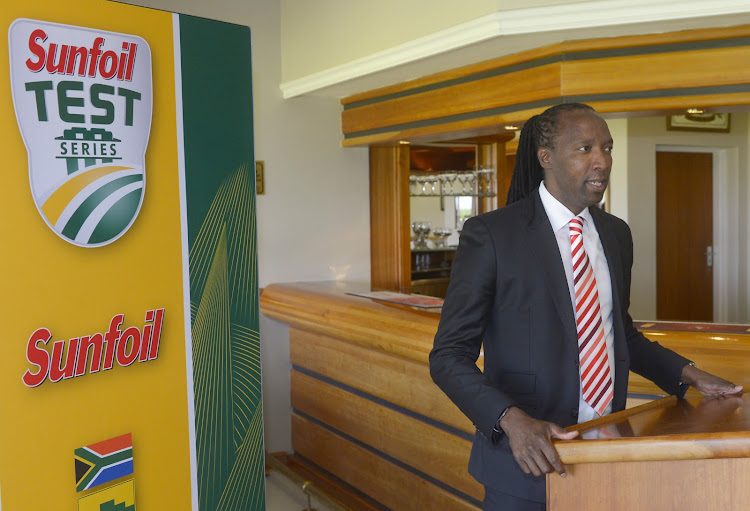 A file photo of North West Cricket board chairperson and president Dr Oupa Nkagisang speaking at lunch during the third day of a Sunfoil Test match between the Proteas and Bangladesh at Senwes Park in Potchefstroom in September 2017.
Image: Sydney Seshibedi/Gallo Images

North West cricket administrators have made the startling revelation that they foiled concerted attempts to prevent provincial president Dr Oupa Nkagisang from participating in the Cricket South Africa (CSA) board and presidential elections to be held in September.

The administrators claim that the CSA leadership tried to stop Nkagisang in a deliberate plot that included the withholding of a forensic audit and investigation report on the North West Cricket (NWC) stadium upgrades.

CSA instituted the forensic investigation after allegations of impropriety related to the 2017 R10-million stadium upgrade project were levelled against NWC president Nkagisang and his board.

NWC was as a result placed under administration in December 2018 and CSA ordered Deloitte to probe the matter in January 2019.

Campaigning for the election of Cricket South Africa’s (CSA) new board chairperson and president has officially opened.
Sport
1 year ago

TimesLIVE can reveal that the forensic report was submitted to CSA on 13 June 2019 and cleared the NWC board.

But CSA sat on the report and withheld it from the NWC board until this week when a TimesLIVE investigation discovered its existence.

Some members of the suspended NWC board believe that CSA wants to keep the report under lock and key until after the September 5 AGM.

“We demand that CSA release the forensic report. It is as simple as that. We have been waiting for the report for long painful 13 months,” said a members’ council member who did not want to be named.

Several administrators within NWC who spoke to TimesLIVE did not want to be named as they feared victimisation.

But Phestus Motshabi, who sits of the NWC board representing clubs from previously disadvantaged backgrounds, made his feelings known and did not mince his words in his conviction of the apparent plot against Nkagisang.

“It is very true. There are people who have been sitting around plotting these for a very long time.

“We were not aware of this plot until recently when we started establishing the truth.

“I am going to say it as it is, there are privileged white people in this province who have had access to the report.

“They have realised that the person that they were targeting may be exonerated, because I have not seen that report, and I would love to do that.

“We are not expelled. We are still the NWC board in good standing,” said Motshabi.

“The North West matter is in the hands of our lawyers and is thus sub judice and we are not in a position to comment,” said CSA in a statement.

Suspended Cricket South Africa (CEO) Thabang Moroe has been formally charged by the board with eight counts of misconduct‚ his legal representatives ...
Sport
1 year ago

It is believed that Nkagisang was targeted from the day he was elected as NWC president unopposed in August 2016. Nkagisang’s election was historic as he became the first ever black president of NWC.

“The white people could not accept that they would be led by a black person, let alone an African,” said another NWC administrator.

“Dr Nkagisang is a threat to some people within CSA because of his principled values as a leader and a cricket administrator.”

Another club administrator said black people were not involved in the procurement of services and products at NWC until Nkagisang changed it all and levelled the playing fields.

“For years NWC only did business with whites, of which some were very close relatives and friends of some of the white employees.

“So you can imagine the (distress) upset it caused when Dr Nkagisang started talking tough about giving opportunities to non-whites as well.

“I mean this was no longer hundreds of thousand rands, it was millions that their ‘family and friends’ were losing out on.”

With Saturday’s 3Team Cricket tournament showing that cricket is indeed possible during Covid-19‚ the national women’s team have taken it a step ...
Sport
1 year ago

Another leader said there is a grouping among the white clubs called “the council” which meets regularly in secret locations at night to find new ways of smearing Nkagisang’s name.

“It turned into a whole mafia style type of thing where meetings were being held behind the president's back. It was almost like watching an Al Pacino movie.”

While others called for the reinstatement of the NWC board, others reserved their judgement for until after they have seen the report to be able to make an informed position.

Nkagisang rubbed the hierarchy up the wrong way when he stood for CSA vice-president against incumbent Beresford Williams, a close ally of board chairperson and president Chris Nenzani, during a messy vote in September 2018.

Cricket SA have been dealt another legal blow after their suspended chief operating officer Naasei Appiah won his appeal against the organisation.
Sport
1 year ago

“That was his obituary written right there and there. He got so close for other people’s liking within CSA.”

Nkagisang is an experienced and respected cricket administrator and holds a doctorate in industrial sociology.

He is seen as someone who is honest and capable of restoring CSA’s battered reputation.

Provinces have until August 21 to submit nominations.

But until the forensic report is released, the NWC board will remain under administration and will not be able to participate in the CSA annual meeting.

The distressing tales that have emerged in recent days from black cricketers detailing how they have been treated by "teammates", coaches, ...
Opinion & Analysis
1 year ago

Cricket SA finally gets much needed wake-up call. But have they awoken?

After adopting the ostrich approach of burying their heads in the sand, the head honchos of Cricket SA (CSA) have finally been shaken out of their ...
Sport
1 year ago

There have been moments when the notion of a Rainbow Nation had SA hearts beating as one, only for heartbreak to follow. Perhaps it is prudent to ...
Sport
1 year ago