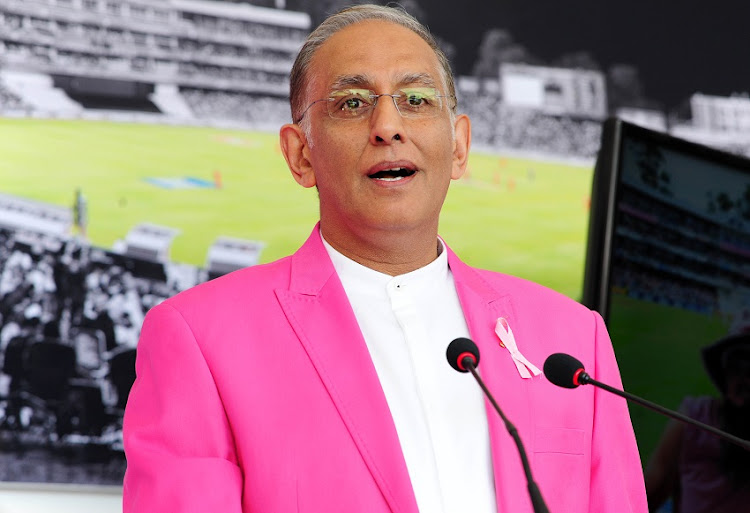 Haroon Lorgat should have been subjected to disciplinary proceedings for the failure to get the T20 Global League (T20GL) up and running during his time as Cricket South Africa (CSA) chief executive.

Lorgat‚ who is part of the CSA nine-member interim board‚ was appointed to the CEO position in July 2013 and parted ways with the organisation in September 2017.

A CSA Internal Audit (IA) conducted an audit on the T20GL governance processes during the establishment of the league and the contents of this document have not been aired in the public until now.

The establishment of a company to run the T20GL and the project overall was spearheaded by Lorgat as CEO three years ago.

The IA probe also extended to reviewing operational processes for procurement‚ recruitment and project management within a company which was registered for the sole mandate to run the T20GL.

The inaugural T20GL was to run from November 3 to December 16 in 2017 but‚ following a deviation from governance protocols‚ the then board took a decision to postpone and later cancel the league on October 10 2017.

After the tournament’s failure to launch embarrassed the organisation‚ IA was requested to conduct a review on management’s effective implementation of a successful delivery of the T20GL.

The failure to launch the T20GL cost CSA millions in expenditure.

Although the T20GL was canned in 2017‚ it is unclear how the aborted tournament did not form part of the Fududzi forensic investigation‚ which probed CSA’s governance and management practises from 2016 to the end of 2019.

CSA interim board spokesperson Judith February did not respond to questions when asked their position on why the T20GL did not form part of the Fundudzi forensic investigation.

At the time the T20GL company was created‚ IA established that there were 21 major projects with a combined cost of R541m excluding the T20GL project.

The internal audit determined that the T20GL project had an estimated cost structure of R375m in the first year alone‚ which translates to 70% of the combined cost of the 21 major projects.

A tight delivery timeframe of the T20GL resulted in the non-compliance of key governance processes‚ according to an audit report of November 2017.

Although CSA was aware of the tight project delivery timeframe‚ the lack of robust process‚ according to the IA report‚ resulted in the project’s failure and the tournament being aborted with millions spent on it.

As a result of the above shortcomings‚ IA concluded that the effective governance and operational processes followed by the CSA management‚ who were accused of lack of cooperation during the investigation‚ “needed significant improvement”.

“Terms of reference for the T20 Global Board and Evaluation Committee were not defined. [There was] a lack of oversight by Board Committees to steer project delivery as there were insufficient meetings held to provide an update to T20 Global Board on T20GL matters‚” the IA said in its findings.

The rest of the IA findings are as follows:

“Project risk register scorecard [was] not developed which requires alignment to the project plan and should be governed by the Board Committee.

“[There was a] lack of budget – budgets are required to be prepared and presented to CSA Finance and Commercial Committee (FinCom) for approval. Even though seed funding of R100m from CSA Board was approved‚ a budget needed to be prepared to monitor the individual project activities that T20GL project needed to accomplish.

“CSA Recruitment and Selection process for the T20GL appointment of staff was not followed on certain key positions.

“Human Resource Department did not coordinate the recruitment process since they were removed or omitted from the process.

“A constructive project management culture and risk management that can measure key deliverables including timelines and cost spent on the project was not developed by the Project Team.

“Due process was not followed for on-boarding local and or international suppliers.

“[There was an] unbudgeted expenditure above R1m not approved through FinCom as required in terms of CSA’s Delegations of Authority policy.

“[There was a] lack of accountability on RFP [Requests For Proposal] processes and discussions held with management confirmed that Heads of Departments – were removed from or partially participated in – the RFP processes which the IA deems to be their area of responsibility.

“Tender Evaluation Committee did not administer the evaluation process of tenders and IA therefore did not obtain sufficient documentation to support tender process was followed.”

After receiving the IA report‚ CSA now needed to implement the recommendations and sought legal opinion and a Pretoria-based law firm was contracted.

The legal opinion CSA sought was in relation to whether:

∙ any misconduct was committed by any employee

∙ whether any employee failed to meet performance standards

∙ and whether any employee should be held accountable for any misconduct and or poor performance.

In preparing its legal opinion‚ the law firm was provided with a copy of the CSA IA and relevant correspondences to and from the affected personnel.

Both the CSA IA and legal opinion‚ which TimesLIVE has seen‚ concluded that Lorgat failed in his fiduciary duties to enforce discipline and to ensure that performance standards were met.

One of the findings of the IA report was that procurement of goods and services and recruitment of employees for the Stellenbosch Kings franchise‚ which was to play in the inaugural T20GL‚ was in contravention of the CSA procurement and recruitment policy.

The law firm concluded in its legal opinion to CSA that‚ under the circumstances‚ Lorgat should be hauled over the coals and be subjected to a disciplinary hearing.

“CSA should strongly consider taking action against the CEO [Haroon Lorgat] for misconduct and or poor performance identified in the IA report‚” the law firm told CSA in its letter dated December 15 2017.

Northern Cape Cricket provincial boss‚ Rihan Richards‚ is the current CSA members council acting president and was on the board of directors when a decision was taken to cancel the T20GL.

Richards has said he vaguely remembers IA report and the legal opinion from his time on the CSA board of directors in December 2017.

“I think the reason no action was taken or the legal opinion was not followed through was because Mr Lorgat had left CSA at the time‚” Richards told TimesLIVE when asked why the organisation did not heed the legal opinion.

Cricket Australia (CA) are still planning for the tour of South Africa to go ahead in February but are monitoring the health situation after a ...
Sport
10 months ago

Omphile Ramela and Xolani Vonya have been barred from participating in further activities and meetings of the Cricket South Africa (CSA) interim ...
Sport
10 months ago

South Africa will tour Pakistan next month for the first time in 13 years to play two tests and three Twenty20 Internationals, officials confirmed on ...
Sport
10 months ago

The second One Day International between the Proteas and England scheduled for Monday at Newlands Stadium in Cape Town will not take place as the ...
Sport
10 months ago