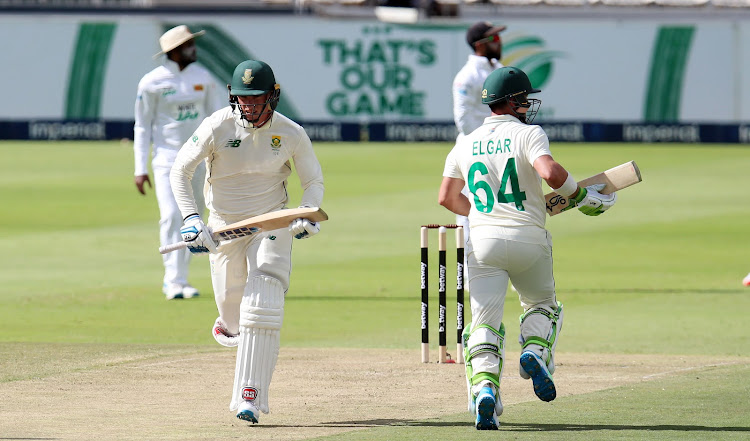 Dean Elgar became only the 10th South African to reach a milestone of 4,000 Test runs as he dropped anchor during the Proteas first innings in reply to Sri Lanka’s low 157 all out in Johannesburg on Sunday.

Former captain Faf du Plessis was the ninth Proteas player to achieve the same feat with a score of 199 in the first Test in Centurion last week.

The 33-year-old Welkom-born Elgar reached the milestone with a well-timed cover drive to the boundary for his well-played half-century.

Elgar took the Proteas to a position of power on 148 for one at stumps on the first day of this series decider.

The elegant left-hander was approaching his 13th Test hundred as he finished on 92 not out.

He got good support from Rassie van der Dussen, who came in at number three 7.3 overs into the Proteas' reply after fellow opener Aiden Markram played a poor shot and was caught behind off the bowling of debutant Asitha Fernando to make it 34 for one.

Van der Dussen was happy to watch from the other end as Elgar dominated the second wicket partnership that yielded a partnership of 114 runs to leave the Proteas in complete control with a deficit of nine runs.

Quinton de Kock’s troops are gunning for a 2-0 series victory after a huge win by an innings and 45 runs in the first Test.

It was pleasing for the team for Elgar and Du Plessis, who made their Test debuts in the same months against Australia in Perth and Adelaide respectively nine years ago, to reach the coveted 4,000 Test runs achievement in successive outings for the Proteas.

The not so pleasing news was that Elgar was dismissed for a duck in both innings by a rampant Mitchell Johnson in a match Graeme Smith’s side won by 309 runs while Du Plessis' debut ended with delight as he scored a fighting 78 not out in the first innings and smashed an unbeaten 110 to save the day and the second Test.

The Test match ended in a draw with Du Plessis the player of the match having set up the building blocks of what would go on to be the Proteas' first ever series triumph on Australian soil.

Back to this match, the Proteas won all the three sessions during the eight hours of toil after a less than convincing opening hour of this Test.

The Proteas announced an unchanged team from the one that thrashed the visitors in the first Test in Centurion last week to take a 1-0 lead while Sri Lanka made four changes to make up for the injuries that crippled them in the opening Test while also handing out two debuts.

Sri Lanka successfully negotiated the first hour of the first session but fell apart spectacularly in the second hour as they lost five wickets before lunch.

Anrich Nortjé claimed the spotlight with his second five-wicket haul while young all-rounder Wiaan Mulder was almost unplayable for his three wickets in a destructive spell of his opening three overs as the Proteas steamrollered the subcontinent island nation.

Sri Lanka stuttered to 84 for five at the tea break on a lively Wanderers surface that offered pace and bounce.

All the wickets to fall in Sri Lanka’s first innings in Centurion last week were shared by the trio while Lungi Ngidi contributed two scalps in the second innings.

Lutho Sipamla, who grabbed six wickets on his Test debut last week, chipped in with the wicket of Harasanga de Silva to make a strong case for future inclusion.

The Proteas will resume on Monday hoping to build on a lead that will end the match as a contest when the visitors come back to bat for their second innings.