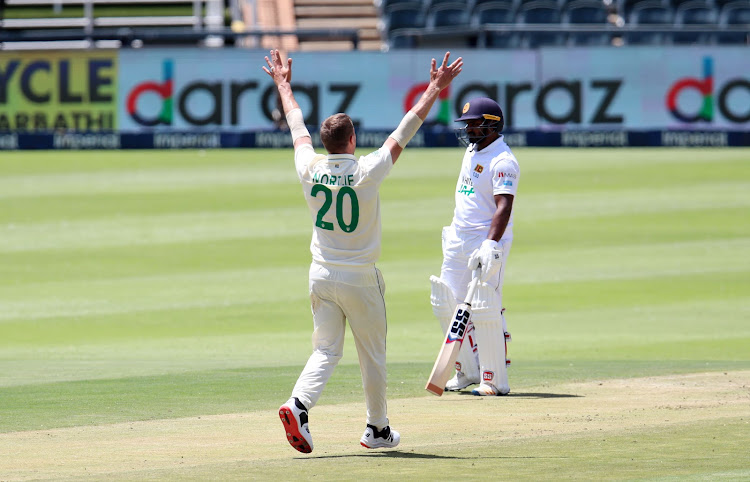 Sri Lanka successfully negotiated the first hour of the first session but fell apart spectacularlyin the second hour against the Proteas as they lost five wickets before lunch on the opening day on Sunday.

Young all-rounder Wiaan Mulder was almost unplayable and he helped himself to three quick wickets in three overs to leave Sri Lanka stuttering on 84 for five on a lively surface at the Wanderers in Johannesburg.

The visitors won the toss and captain Dimuth Karunaratne chose to bat as the Proteas chase a 2-0 clean sweep having won convincingly in the first Test in Centurion last week.

It looked a good toss to win for Sri Lanka as the Proteas bowlers hardly troubled the openers until the 10th over when Karunaratne’s poor showing in this series continued after the visiting captain gloved a short off a length delivery from Anrich Nortjé for his 2 off 32 balls.

The breakthrough for the visitors came when they brought in Lahiru Thirimane to the crease to join opener Kusal Perera and the two left-handers successfully negotiated the early unsuccessful onslaught from the home side as they conjured up a meaningful partnership of 52 runs off 62 balls.

Perera scored freely and needed just 56 balls to race to his sixth Test half-century with 44 of those runs coming in boundaries but his flamboyant approach let him down in the 20th over when he edged Wiaan Mulder and was caught by Aiden Markram in the cordon to make it 71 for two for the visitors.

Mulder dismissed Perera with his seventh ball of the morning having come in at second change.

The 22-year-old all-rounder struck again in his 11th ball this time getting rid of the dangerous Kusal Mendis for a four-ball duck as the Lions star grabbed two wickets in his second over of the match.

Mulder was on fire and got his third wicket in the cordon with his 17th delivery to break the resistance from Lahiru Thirimane [17 runs from 30 balls] as Sri Lanka slumped to 80 for four after 23 overs.

Debutant Minod Bhanuka walked in with his team in sixes and sevens but he too did not last long and faced 10 balls before he edged to first slip where Faf du Plessis took a splendid low catch off Nortje’s bowling.

Having started well, Sri Lanka failed to cash in and slumped from 71 for three after 20.5 overs to 84 for five as Nortje notched up his second wicket of the match with the last ball before lunch.

It is a far cry from their performance on the opening day in the first Test when the visitors put on a first innings of 396.

Niroshan Dickwella was yet to get off the mark and will find it hard to make a meaningful contribution with Dasun Shanaka, Hasaranga de Silva, Vishwa Fernando, Dushmantha Chameera and Asitha Fernando to come.

The Proteas, who have lost eight of their last 10 tests, named an unchanged team from the one that thrashed the visitors by an innings and 45 runs in the first Test in Centurion last week.

Sri Lanka won the toss and captain Dimuth Karunaratne chose to bat  in the second and final Test against SA at the Wanderers Stadium in Johannesburg ...
Sport
1 year ago