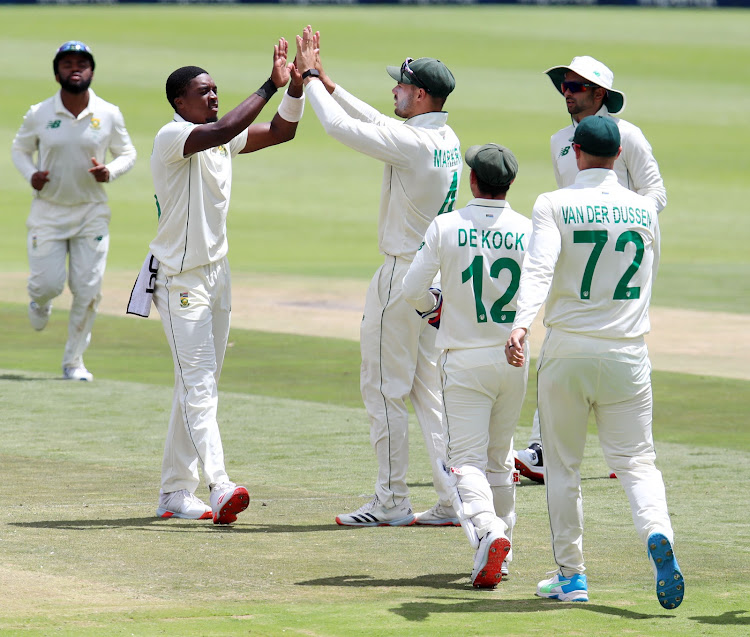 When speedster Anrich Nortje notched up a maiden five-wicket haul in his fledging Test career a year ago, the Proteas were in a perilous position that bordered on the ridiculous and embarrassment.

The visiting England side had scored 400 and by stumps on the second day at the Wanderers in Johannesburg, the Proteas slumped to 88 for six in their reply during a series which the Proteas embarrassingly lost 3-1 after taking the lead in the opening Test match.

When Nortje grabbed his second five-wicket haul on day one of the second and final Test against Sri Lanka at the same lively venue on the Highveld on Sunday afternoon, the Proteas were in a commanding position with the 27-year-old Nortje and young all-rounder Wiaan Mulder steamrollering the visitors with their bounce and mostly good length and lines.

The Proteas bowled out Sri Lanka for 157 shortly before the tea break was taken with opener Kusal Perera the only man to make a meaningful contribution as his fluid 60 off 67 balls helped Sri Lanka post a respectable first innings total.

Nortje ended with figures of six wickets for 56 runs in 14.3 overs with one maiden while he offered no extras.

The Warriors speedster now has a career 28 Test wickets from his seven matches since making his debut against India in October 2019.

Openers Dean Elgar and Aiden Markram, who scored 95 and 68 respectively in the first Test as the Proteas posted a first innings score of 621 in reply to Sri Lanka’s 396 all out, were at the crease.

Elgar, who reached the milestone of 4,000 Test runs, was on 19 off 18 balls while Markram was on three off 12 as the tea break came with the Proteas 22 for no loss of a wicket after facing five overs.

The Proteas are trailing by 135 and will be hoping that Elgar and Markram will frustrate the bowling attack and whittle down their low first innings score.

The Proteas, who have lost eight of their last 10 Test matches, named an unchanged team from the one that thrashed Sri Lanka by an innings and 45 runs at Centurion in the first Test last week.

The team management opted to retain spinner Keshav Maharaj despite the pitch looking juicy for an all-seam attack but the slow left-arm orthodox spinner was not needed as Nortje and Mulder stole the show.

Fast bowler Lutho Sipamla continues to make a strong case for his inclusion in the Test team as he added yet another wicket to his name following a stellar debut last week.

All the Sri Lanka men were caught behind by either captain and wicketkeeper Quinton de Kock, who took five catches, or the slip cordon where Faf du Plessis and Rassie van der Dussen took brilliant catches.