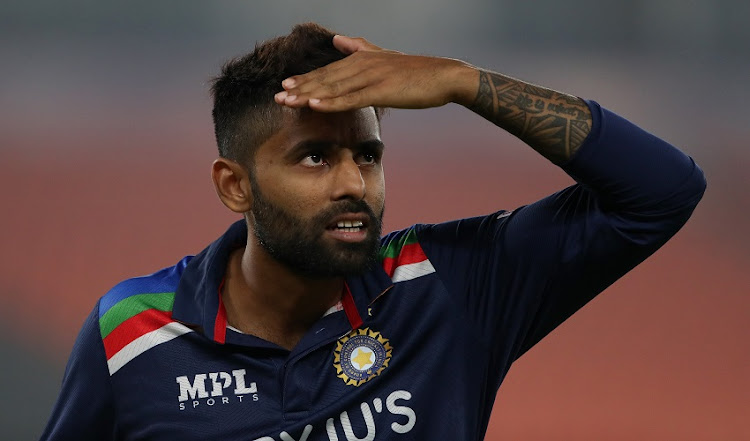 Suryakumar Yadav of India during the 4th T20 International between India and England at Narendra Modi Stadium on March 18, 2021 in Ahmedabad, India.
Image: Surjeet Yadav/Getty Images

Batting great Sachin Tendulkar is convinced Suryakumar Yadav and Ishan Kishan are good enough to be in the India squad when the nation hosts the Twenty20 World Cup later this year.

Both the top-order batsmen made their India debut in the ongoing T20 series against England, with Kishan smashing an incendiary fifty in his first match.

Yadav, who plays with Kishan for Mumbai Indians in the Indian Premier League, had to wait until his second match to get a bat but also produced a match-winning half-century in Ahmedabad.

"There is no question how talented both the players are," Tendulkar told Reuters in a telephone interview.

"It eventually boils down to selection and the selection committee. But I can say that having played in IPL against all the leading foreign players, they are ready to play (in the Twenty20 World Cup)."

As the Mumbai Indians mentor, Tendulkar had a ringside view of the duo in the IPL and was not surprised how they performed against the top-ranked England team.

"They are very good players. I have spent a lot of time with Surya, he looked fantastic," Tendulkar added.

"Before the last IPL season, when Ishan was practising in the nets, there were a number of things which one could see. He was trying to get his bat swing (right), and be mentally stable. From there on, how he has progressed is remarkable."

Tendulkar pointed out that both batsmen had faced Jofra Archer and Ben Stokes in the IPL and it showed in the assurance with which Yadav handled the England bowlers on Thursday.

Yadav's fearless batting was best illustrated when he nonchalantly pulled Archer for a six from the first ball he faced in international cricket.

"What IPL has done is it has given exposure to players to play against the leading players in the world," Tendulkar said.

"Even before you've played for the country, you have the chance to play against them. During our time, it was for the first time ... Now with so may leagues across the globe, it's never the first time."

Tendulkar retired from the professional game in 2013 after notching a still unmatched 100 international centuries in a prolific 24-year career.

He returned to the crease recently as captain of the India Legends team in the Road Safety World Series in Raipur -- a competition aimed at spreading safety awareness in a country which accounts for 11% of the world's road traffic deaths.

The 47-year-old has clearly not lost his touch and back-to-back fifties powered his team to Sunday's final against their Sri Lankan counterparts.

"There were multiple issues playing after a long time - the back, knees and all those kind of things - but the good thing is we're playing for a wonderful cause," Tendulkar said with a laugh.

Other players featuring in the series include Brian Lara and Kevin Pietersen but Tendulkar said it was not just about having fun for the retired greats.

"Players are giving their best, players are diving around and doing everything to win," he said.

"The competitiveness is there, the intensity is there."