Sisanda Magala's familiarity with his Proteas teammates gives him the edge 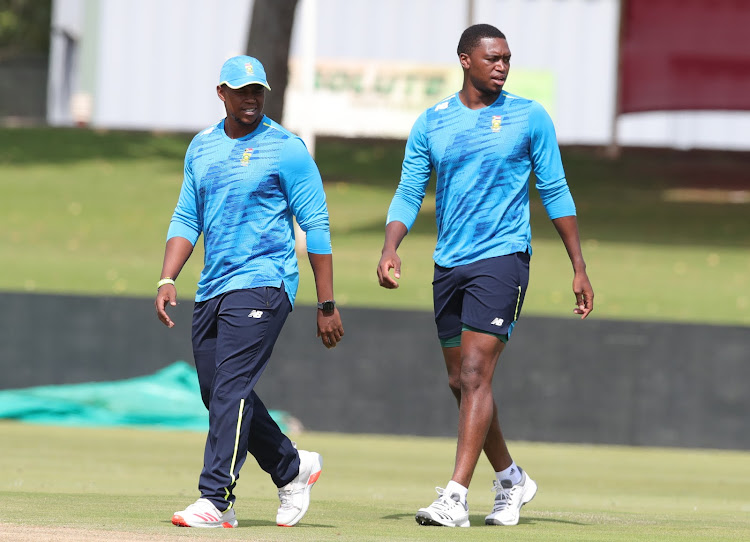 Likeable bowling all-rounder Sisanda Magala's familiarity with his Proteas teammates has made it easy for him to make a smooth transition and adjust to the national set-up.

Magala is in line to make his long-awaited debut for the Proetas in the limited-overs series against Pakistan‚ which starts on Friday in Centurion‚ and is one of the favourite players on the domestic scene.

“Knowing all the players has made the transition very easy in terms of team chemistry‚” said Magala as the Proteas continued preparations for the first match at SuperSport Park.

“I have played with and against these guys a lot‚ and it is really good to have that mutual respect and competition amongst us as players.

"Knowing these players helps to ensure that the transition to this new environment is not awkward‚ or takes too long to build team chemistry.”

During his domestic career‚ Magala has featured in almost 300 First-Class‚ List-A and T20 matches for Eastern Province‚ Warriors‚ Boland and the Lions where he has claimed 492 wickets.

Despite his reputation as one of the best death bowlers and devastating end-of-innings power hitter‚ Magala has not played for South Africa at senior level‚ but he says he is not feeling any pressure.

“I know exactly who I am.

"I know exactly where I come from and I know what types of obstacles I have come across and managed to overcome.

"I know what type of character I am‚ so it is good to get pressure. If you get pressure‚ you have to react by doing well‚ but I am just taking it one game at a time.”

Asked about preparations for the series‚ Magala said they have been working hard at training under the watchful eye of the technical team led by Mark Boucher.

“It’s been hard with lots of running‚ skills work and in a competitive environment. It has been a good few days of training and I am enjoying it.

"Like I said earlier‚ I am just taking it one day at a time and I am really happy that I am back with the national team. I am happy to be in the running for selection but there are a couple of obstacles that I have to overcome.

"All in all‚ I am excited and I can’t wait for the challenges that are going to be thrown at us by Pakistan.”

Though they are working hard in camp‚ Magala said there is room for having fun and he is one of the entertainers.

“I am the entertainer and I chill with guys like Lutho (Sipamla)‚ Beuran (Hendricks)‚ Temba (Bavuma) but I enjoy the company of anyone where we can crack jokes and talk nonsense.

“I wouldn’t say I am too loud in terms of words‚ I like to do things through actions.

"I crack a couple of jokes to cheer up someone who may be having a bad day so that they can take their minds off what they may be going through.”

Proteas captain Temba Bavuma believes that SA can emulate England and win the next Cricket World Cup in 2023 after crashing out of the previous ...
Sport
2 weeks ago

Zimbabwe will host Pakistan next month for two tests and three Twenty20 internationals, all behind closed doors at Harare Sports Club, Zimbabwe ...
Sport
2 weeks ago

England have no reason to push the panic button despite their 2-1 loss to India marking a second straight series defeat in the 50-overs format, said ...
Sport
2 weeks ago

New Proteas limited-overs captain Temba Bavuma wants the team to play an aggressive brand of cricket that can be executed under different conditions ...
Sport
2 weeks ago

A career-best six-for by Prenelan Subrayen played a key role in the Dolphins turning the 4-Day Domestic Series final on its head when they dismissed ...
Sport
2 weeks ago

Dolphins coach Imraan Khan does not think there has ever been a tandem performance by spinners as relentless as the one put on by Prenelan Subrayen ...
Sport
2 weeks ago
Next Article