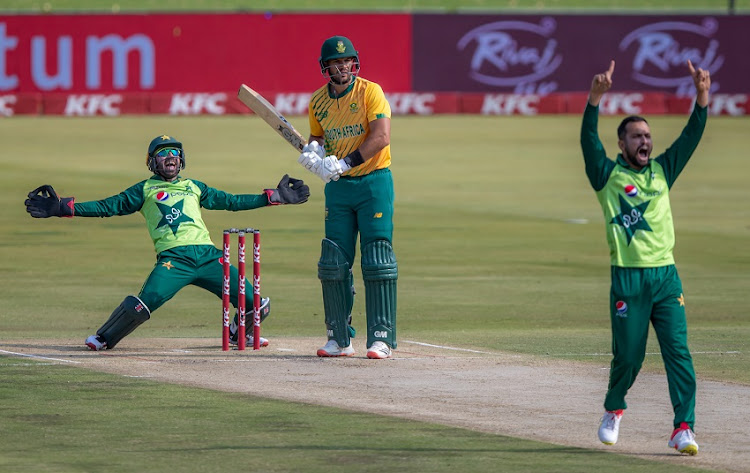 Massive appeal from Mohammed Nawaz and Mohammed Rizwan of Pakistan for LBW against Aiden Markram of SA during the 4th KFC T20 International match between SA and Pakistan at SuperSport Park on April 16, 2021 in Pretoria, South Africa.
Image: Gordon Arons/Gallo Images

SA’s unimpressive summer ended with a whimper at SuperSport Park in Centurion on Friday night as Pakistan beat them by three wickets to win the T20 series 3-1.

With this victory‚ Pakistan have beaten SA in both the T20 and ODI series and the public inquest into the suitability of SA coach Mark Boucher and some OF his players will start soon.

The Proteas played this T20 series without captain Temba Bavuma‚ Quinton de Kock‚ Kagiso Rabada‚ Anrich Nortjé‚ Lungi Ngidi and David Miller but that cannot be used as an excuse for the poor manner in which they lost some of the matches.

For Pakistan‚ this limited-overs tour was a roaring success as they beat their hosts in the ODIs and T20 matches with key players like Babar Azam‚ Fakhar Zaman‚ Mohammad Hafeez‚ Mohammad Nawaz‚ Hasan Ali and Shaheen Afridi proving crucial.

SA’s summer campaign started with defeat to England and they followed that up by beating depleted Sri Lanka but suffered heavy defeats to Pakistan both away and at home.

This was the second match in succession where Pakistan overpowered the Proteas‚ who largely huffed and puffed as their more experienced visitors dictated terms to them.

For the Proteas‚ it was a series of few highlights besides the notable performances of top order batsmen Aiden Markram and Janneman Malan and fast bowler Lizaard Williams‚ who was on debut in the series.

In the third match on Wednesday‚ Pakistan beat SA by nine wickets and they ended this tour with a nervy win that was only guaranteed in the final over with a maximum by Mohammad Nawaz.

Pakistan captain Azam‚ named man of the series‚ won the toss and inserted the Proteas to bat‚ the South Africans bowled out for 144 after 19.3 overs with Faheem Ashraf and Hasan Ali taking three wickets.

They were ably supported by Haris Rauf‚ who ended his bowling shift with two wickets while Mohammad Nawaz and Shaheen Afridi claimed one each. Rassie van der Dussen was the only batsman to score a half-century.

Pakistan’s chase was not as smooth as they had hoped as they lost wickets at regular intervals where Williams and Sisanda Magala claimed two wickets apiece and were joined by Andile Phehlukwayo‚ Tabraiz Shamsi and Bjorn Fortuin with one each.

Pakistan lost Mohammad Rizwan without scoring on the third ball when he was stumped by Heinrich Klaasen from behind off the bowling of Fortuin.

Williams rocked the Pakistan top order when he claimed the prized scalps of Fakhar Zaman (60) and the mightily dangerous Azam (24) in quick succession in the 10th over.

Proteas limited overs captain Temba Bavuma will not lead the side in the four-match T20 series against Pakistan due to a grade one hamstring injury.
Sport
1 year ago

Phehlukwayo‚ who was strangely underused in the series‚ joined the party by removing Haider Ali (3) and Shamsi did not want to be left out as he accounted for Mohammad Hafeez (10).

Earlier the Proteas lost Markram in the second over for 11 runs as he failed to score four consecutive half-centuries and join the exclusive list of Brendon McCullum and Chris Gayle.

Markram was followed by Malan who was caught by Zaman at mid-off from the bowling of Faheem Ashraf‚ and the procession continued with the wickets of Klaasen‚ Rassie van der Dussen and George Linde.

Pakistan continued to wreak havoc with ball in hand as they managed to deal with the lower batting order of debutant Wiaan Mulder‚ Phehlukwayo‚ Sisanda Magala‚ Fortuin and Tabraiz Shamsi.

Proteas coach Mark Boucher has reiterated that former captain AB de Villiers remains in the frame for the men's Twenty20 Cricket World Cup to be ...
Sport
1 year ago

Proteas coach Mark Boucher has explained the bizarre decision by captain Heinrich Klaasen not to give all-rounder Andile Phehlukwayo an opportunity ...
Sport
1 year ago

Klaasen after Azam smashes Proteas: ‘We could have done a few things differently’

Stand-in Proteas captain Heinrich Klaasen ruefully admitted that it was difficult to counter the class of Babar Azam in the thumping nine-wicket loss ...
Sport
1 year ago