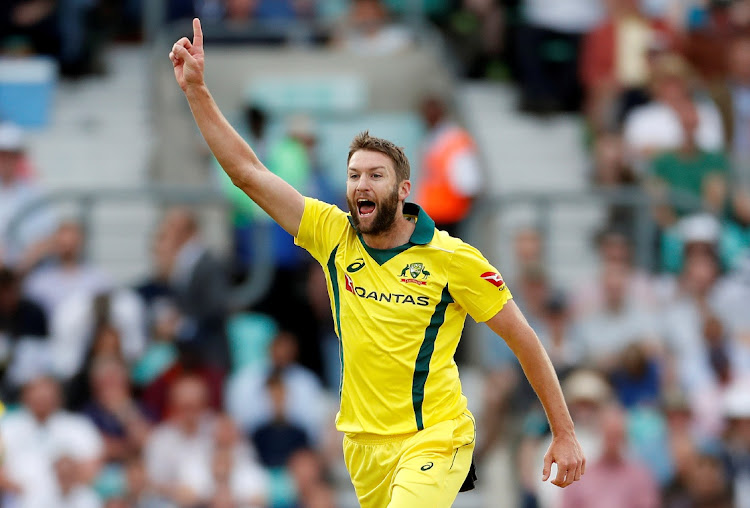 Australia's Andrew Tye is one of three players who left the IPL amid Covid-19 scares and are now back home Down Under.
Image: PAUL CHILDS

Tye, who was with the Rajasthan Royals, flew to Sydney on Sunday via Mumbai and Doha, citing the "stress of bubble life" and concerns about borders closing in Australia.

"I just thought I should try and get on the front foot and get home before I got locked out of the country," he told Australian radio station SEN.

"I think I've had 11 days at home and out of the bubble since August.

"A lot of guys have been in touch today once they've realised I was leaving.

"Some of the guys are very interested in what route I took home and how I approached it.

"I'm not sure if I'll be the only one (returning), but that's too early for me to say."

Zampa and Richardson have now decided to follow suit, with Royal Challengers Bangalore on Monday saying they were unavailable for the rest of the IPL season and were returning to Australia for "personal reasons".

A number of Australia's top cricketers remain in India, including batsmen Steve Smith and David Warner, and paceman Pat Cummins.

Hospitals in Delhi and across the country are turning away patients after running out of medical oxygen and beds.

Australia said last week it would cut flights from India and reduce the number of its citizens able to return from other red-zone countries to contain the risk of more virulent strains of Covid-19 spreading.

Australia has largely eliminated Covid-19 by closing its borders and installing snap lockdowns when cases of community transmission occur.

"We will continue to listen to feedback from those on the ground in India and the advice of the Australian government," the bodies said in a joint statement.

Former Australia captain Ricky Ponting, who coaches the IPL's Delhi Capitals, suggested he would not be among those to pull out of the league.

"Even with the country being in a situation that it is, I think cricket can still bring a lot of joy to people," he said in comments published by ESPNCricinfo.

"So it is important for us to be doing what we can as cricketers and as coaches and as a franchise to putting on the best show as possible to give the people something that they'd like to see."

India off-spinner Ravichandran Ashwin has also pulled out of the IPL to support his family.

Organisers have said they will push on with the tournament amid growing criticism.

An IPL governing council member told Reuters on Sunday the league provided a "much-needed distraction from all the doom and gloom".

The Cricket SA interim board and the members' council have announced the two warring parties have reached an agreement in their impasse over ...
Sport
1 year ago

Cricket SA (CSA) staff members have sent an impassioned plea to minister of sport Nathi Mthethwa to reconsider his decision to invoke section 13(5) ...
Sport
1 year ago

There appears to be no end in sight to the furore around cricket after Sascoc fired a salvo at sports minister Nathi Mthethwa and criticised his ...
Sport
1 year ago

Devdutt Padikkal seems to have impressed two of the most important figures in Indian cricket after the opener's whirlwind century powered Royal ...
Sport
1 year ago

Minister of sport Nathi Mthethwa has informed the interim board and members' council of Cricket South Africa (CSA) of his intention to invoke section ...
Sport
1 year ago