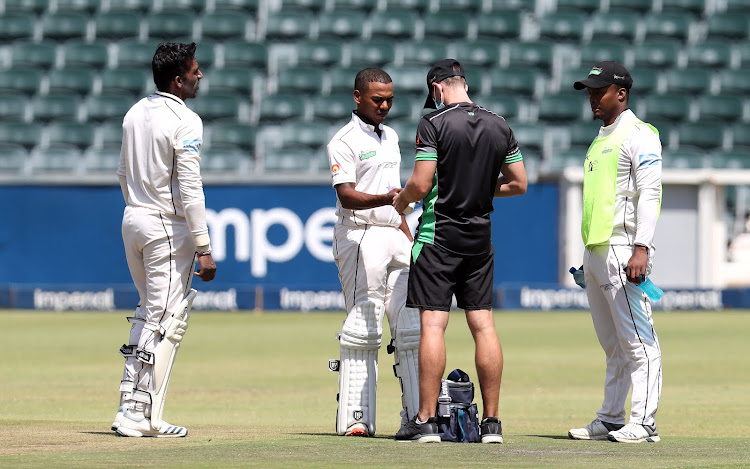 Keegan Petersen, pictured receiving treatment during the Dolphins CSA 4-Day match against the Lions in Johannesburg in March 2021, is poised to make his Proteas test debut against the West Indies later this month.
Image: Muzi Ntombela/BackpagePix

Keegan Petersen has been nervous about making his Proteas Test debut for a while, and admitted the thought of doing so during the tour of the Caribbean this month is already giving him the heebie-jeebies.

The 27-year-old right-hander was part of the Proteas team that jetted out to the West Indies on Monday evening for the two-match Test series and five Twenty20s.

The first Test will be played at the Daren Sammy Cricket Ground in St Lucia from June 10 to 14 and the second and final match from June 18 to 22 at the same venue.

Following the retirement from Test cricket of Faf du Plessis‚ Petersen is poised to make his debut in the opening match.

This was confirmed by new captain Dean Elgar‚ who said at his departure press conference on Saturday: “Without Faf‚ a guy like Keegan Petersen comes into the mix.”

“I have been nervous for while‚” said Petersen.

“It gives me goosebumps just thinking about it. I know I will have big boots to fill. When I try to think about it‚ you know‚ anyone would be nervous.

“But it is what we dream of as kids and eventually when the dream becomes a reality‚ it kind of gives your system a shock to say, yeah you have found your dream so now what are you going to do about it?”

Petersen’s selection is not cast in stone and he will only know for sure when the team is announced.

“We don’t know where it is going to go in terms of selection‚ but if I do get a chance I will obviously be extremely excited to represent my country and play with a good bunch of blokes.”

Petersen has been a regular performer on the domestic scene over the past few seasons and his inclusion in the squad was due reward.

If selected‚ Petersen is expected to slot in at No 4 where Du Plessis predominantly batted before his retirement.

Petersen could also come in at his favoured‚ No 3 but Rassie van der Dussen is establishing himself in that position.

The Proteas assembled at Kingsmead in Durban ahead of their departure, and Petersen said preparing in the conditions at his home venue was ideal for pitches they will be confronted with in St Lucia‚ which are expected to be low and slow.

“I always believe Kingsmead has prepared me for any slow or turning wicket or whatever the case may be.

“Whatever I will get I know I will be prepared. I don’t know the conditions and we will see when we get there, but whatever it is it won’t be anything new to me.”

Anrich Nortje and Shabnim Ismail received the highest accolade that Cricket South Africa (CSA) has to offer when they were named SA men’s and women’s ...
Sport
1 week ago

Australian cricketers, including former captain Steve Smith and David Warner, were released from hotel quarantine in Sydney on Monday after being ...
Sport
1 week ago

Proteas Test captain Dean Elgar says they will have to acclimitise quickly to what are expected to be slow and low conditions in the West Indies.
Sport
2 weeks ago

Today in SA sports history: May 28
Sport
2 weeks ago

North West Cricket (NWC) administrator Archie Pretorius has denied allegations that he did not follow procedure during the processes used to call for ...
Sport
2 weeks ago

Lonwabo Tsotsobe says his mother was “kicked out of the presidential suite at a stadium” and denied entry into the plush hospitality facility on a ...
Sport
3 weeks ago

Insiders in cricket have described Graeme Smith and Haroon Lorgat as Cricket SA “blue-eyed boys” and alleged that the indefinite postponement of the ...
Sport
3 weeks ago

The ombudsman for Cricket South Africa’s (CSA) SJN transformation project advocate Dumisa Ntsebeza has detailed how the organisation’s interim board ...
Sport
3 weeks ago