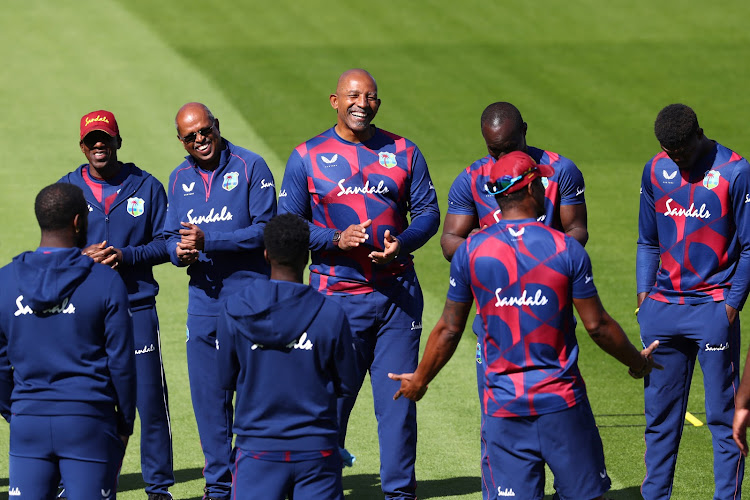 Laidback A file photo of West Indies head coach Phil Simmons with the players before the start of play against England at Old Trafford in Manchester in July 2020.
Image: Michael Steele/Reuters

West Indies coach Phil Simmons is looking to his improving pace attack to steer the side to a first ever test series victory over South Africa when the teams start the first of two matches in St Lucia on Thursday.

The wicket at the Daren Sammy Cricket Ground looks as though it will suit the seamers, which is a strength of both sides, and according to Simmons provides his team with the best chance of bowling the tourists out twice.

"The improvement I would like to see for this series is our ability to take 20 wickets," he told reporters.

"We did in Bangladesh on helpful pitches, and when the pitch was not helpful in Antigua (against Pakistan), we struggled.

"Our fast bowling department has been strong for long now. They are the ones that have kept us in matches, bowling out teams when it did not appear likely."

The Proteas of South Africa are a team in transition having lost a number of senior players to retirement in recent years, especially in the batting department.

But Simmons has warned his side not to be complacent.

"Any team you come up against, you have to look for where you can exploit them.

"They are very strong at the top with the captain (Dean Elgar) and then later down the order with guys like Quinton de Kock.

"We have to step it up and be 100% better than we were when we played our last game. We are up to six (in the test rankings) and that is just the start of things.

West Indies have won only three of their 28 tests against South Africa, the last victory in 2007.

This will be the first time they have met in the longer format since 2015.

The proliferation of domestic Twenty20 leagues poses a threat to international cricket and the game must find a way to balance both, according to ...
Sport
7 months ago

Proteas spinner Tabraiz Shamsi has admitted that playing second fiddle to legendary Imran Tahir in the limited overs sides was not easy.
Sport
7 months ago

New North West Cricket (NWC) president Tebogo Motlhabane's appointment has been challenged just days after his ascent to the seat and his rival ...
Sport
7 months ago

Proteas spinner Tabraiz Shamsi wants to use the coming two-match Test series against the West Indies in Saint Lucia this month to finalise the ...
Sport
7 months ago

As a first time visitor to the Caribbean‚ Proteas quickie Anrich Nortje has no idea how the conditions are going to play out for fast bowlers in ...
Sport
7 months ago

Keegan Petersen has been nervous about making his Proteas Test debut for a while, and admitted the thought of doing so during the tour of the ...
Sport
7 months ago