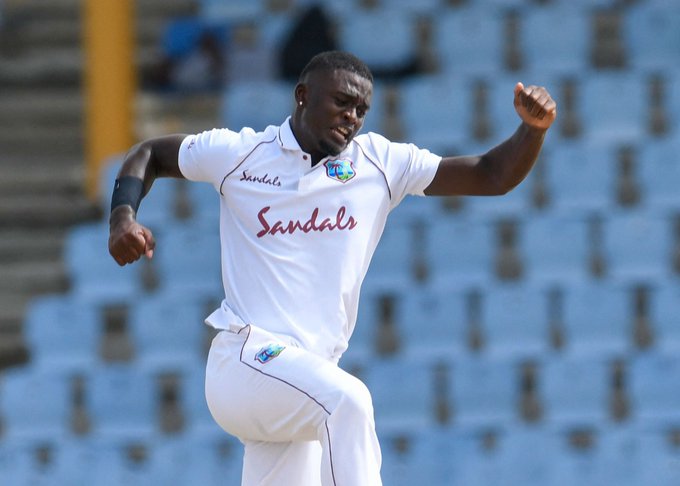 West Indies captain Kraigg Brathwaite had very few positives to draw on from a heavy innings defeat in the first test against the Proteas of South Africa in St Lucia but singled out teenage fast bowler Jayden Seales for special praise.

The 19-year-old had played only one first-class match before the test but took 3-75, with his figures slightly tarnished by a late onslaught from centurion Quinton de Kock.

Seales’ ability to swing the ball at pace off a good length bodes well for the future, Brathwaite said.

"Not all bowlers have that natural length and he obviously swings the ball. So I was not surprised by his performance in this game," the captain said.

"Even at practice, there are different little things that he does with the ball. He's one for the future, big time.

"Obviously he's young, but he was strong, his pace was up throughout and I really think he's something special."

West Indies performed well as a unit with the ball but were woeful with the bat as they were bowled out for 97 and 162, slumping to defeat by an innings and 63 runs.

That will weigh heavily on their minds going into the second test, which starts on Friday at the same venue.

"We've got to bat better. Roston Chase showed fight (making 62 in the second innings), but that first innings hampered us a lot," Brathwaite said.

"We'll take a little break and come back stronger. For me it's about getting your mind in the right place. It's more mental than technical."

Sascoc is fighting CSA's move to a majority independent board by‚ among other things‚ looking for support from the sport’s world governing body.
Sport
7 months ago

Explosive Proteas batsman Quinton de Kock has revealed that he was not mentally tired of cricket because of the Test captaincy when he asked for a ...
Sport
7 months ago

The disputed election at North West Cricket that saw the election of Tebogo Motlhabane as the president is set to go for mediation in Potchefstroom ...
Sport
7 months ago

Cricket SA (CSA) ushered in a new era of local sport yesterday, breathing life into a first majority independent board, but they still couldn't ...
Sport
7 months ago

SA fast bowler Kagiso Rabada took five wickets as the tourists cruised to victory over West Indies by an innings and 63 runs before lunch on day ...
Sport
7 months ago