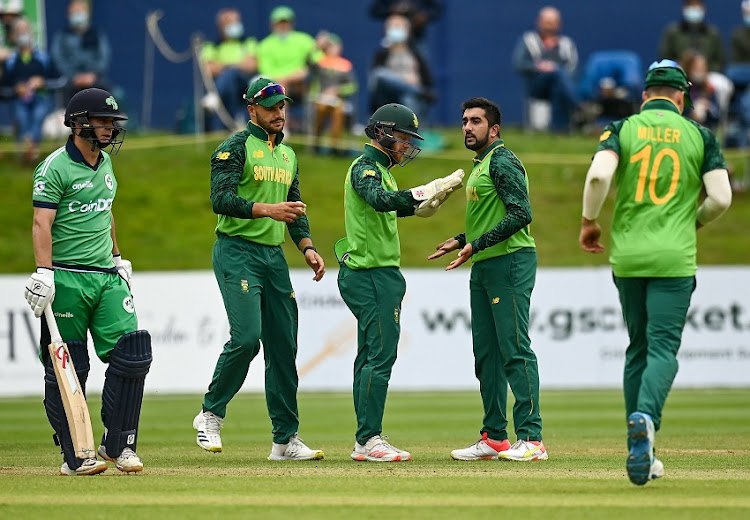 Tabraiz Shamsi of SA, second right, celebrates the wicket of Andrew McBrine of Ireland with teammate Kyle Verreynne during the second Dafanews Cup Series ODI match against Ireland at The Village on July 13 2021 in Dublin.
Image: Harry Murphy/Gallo Images

Ireland opener and captain Andy Balbirnie sparkled with his seventh ODI century as his team stunned SA by 43 runs in the second match at Malahide Cricket Ground in Dublin on Tuesday.

The first Test at the same venue on Sunday was rained out and this result means the home side have taken a 1-0 lead in the three-match ODI series that concludes on Friday.

The win also means Ireland have claimed important ODI World Cup Super League points that will significantly boost their chances of qualifying for the 2023 World Cup‚ while the Proteas remain at the bottom half of the qualifying table.

Temba Bavuma won the toss and chose to bowl‚ but the visitors were outdone by the batting efforts of centurion Balbirnie and major contributors Harry Tector (79) and George Dockrell (45) as Ireland ended on 290/5.

With ball in hand‚ Joshua Little and Andy McBrine returned with two wickets each while Simi Singh and George Dockrell claimed one each as they registered their first and famous ODI win over SA.

The Proteas went into this match without the influential Quinton de Kock and fast bowler Lungi Ngidi‚ who were rested‚ while Ireland were without injured William Porterfield.

On their way to setting the Proteas the mammoth 291 target for victory‚ Ireland first lost the wicket of Paul Stirling for 27 after Keshav Maharaj made the breakthrough in his second-over off spin.

The dismissal of Stirling brought to an end a good opening stand with his captain Balbirnie of 64 off 81 as they laid a solid foundation to their innings.

With Stirling back in the change rooms‚ Balbirnie and McBrine went about the rebuilding job with another partnership of 60 off 90 as they frustrated Maharaj‚ Kagiso Rabada‚ Anrich Nortjé‚ Andile Phehlukwayo and Tabraiz Shamsi.

Their stand was finally broken in the 29th over when McBrine fell victim to the spin wizardry of Shamsi and he was later followed by Balbirnie shortly after he claimed his seventh century that included four centuries and two maximums.

Phehlukwayo claimed the last two wickets of Harry Tector and George Dockrell as they ended their batting innings on 290/5 after their allotted 50 overs‚ which proved to be a bridge too far for the Proteas.

In their chase SA lost wickets at regular intervals‚ starting with Aiden Markram‚ who was caught by McBrine for only five runs and was soon followed by skipper Temba Bavuma.

Things got more serious for the Proteas a few overs later when Janneman Malan‚ who scored a commendable 84 off 96‚ was caught by Mark Adair from Joshua Little.

South African wickets continued to tumble with Rassie van der Dussen losing his one run shy of his ninth ODI half century. He was followed by Kyle Verreynne (13)‚ Phehlukwayo (2)‚ David Miller (24)‚ Rabada (16)‚ Maharaj (17) and Nortje (10).