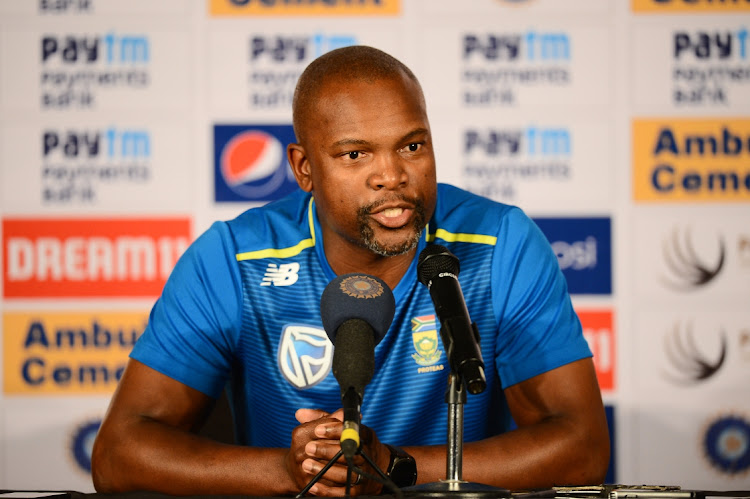 Proteas assistant coach Enoch Nkwe says the team is not far from where it needs to be leading up to the Cricket World Cup in the United Arab Emirates.
Image: Isuru Sameera

The Proteas top order batting and death bowling is still a cause for concern as the T20 World Cup draws closer‚ but Enoch Nkwe‚ the national team’s assistant coach‚ is confident the team is not far from reaching a level they need to be at.

After a drawn ODI series against Ireland in Dublin‚ the Proteas resume their preparations for the Twenty20 Cricket World Cup‚ to be hosted in the United Arab Emirates in October and November‚ with a three-match T20 series against the Irish which starts on Monday.

The Proteas beat the West Indies 3-2 in the Caribbean last month in their last T20 series before travelling to Ireland‚ but their come-from-behind series victory was not without several question marks‚ with the top-to-middle-order and death bowling of a particular concern‚ and Nkwe acknowledged that.

“As much as we won the series in the West Indies‚ we were realistic on how we actually went about our business‚” said Nkwe.

“We did have a debrief and assess quite a few concerns that we need to continuously work on‚ and actually back ourselves in different phases of the game in our batting‚ bowling and the fielding department.

“As much as we are still not where we are supposed to be at‚ those are some of the things that we are working on.”

The first T20 match will be played in Malahide‚ Dublin‚ on Monday at 5pm SA time.

“Going into the series now we are not going to take it any lightly and we do understand that there are areas we need to improve on‚ especially in our bowling right at the back end‚ but also in our batting in different phases‚” Nkwe said.

The Proteas second in command hinted at personnel changes and said a few players are expected to get a look in.

“Yes we would like to see different personnel‚ as well in different roles‚ and see how they actually perform and respond to that.

“There will be opportunities created for certain individuals and I am really excited about that.

“That is something that we are going to be trying out in the next couple of games and then we can reassess after this series and see in terms of going to Sri Lanka what is our best combination.”

The conditions the Proteas are exposed to in Ireland will not be the same as the ones they played in their triumphant tour of the West Indies.

“We do understand that conditions are going to be different‚ and even at the World Cup‚ we might face different conditions within the same country‚” said Nkwe.

After the first match in Malahide‚ Dublin‚ the T20 series moves Stormont in Belfast where the second and final matches will be played on July 22 and 24.

“So let’s be that flexible and accept the challenge and actually use it to our advantage.

The Proteas will have a minimum of five T20 matches after Monday’s game and Nkwe admitted the team is running out of time.

“Some of the things we want to ensure is that we are confident in our death bowling. We have clear plans and it is just a matter of backing ourselves.

“By the time we finish the Sri Lanka tour we can trust the formula that we have been working on over the last couple of months. We don’t have a lot time.

“We only have six games [before the World Cup] but we believe that we are on track."

There were tears of sorrow from black former cricketers at Cricket SA's (CSA) transformation inquiry hearings this week as they relived their ...
Sport
6 months ago

On-form Proteas top order batsman Janneman Malan has played himself into contention for this year’s T20 World Cup in the United Arab Emirates in ...
Sport
6 months ago

Former Gauteng cricketer Sonnyboy Letshela has testified that he tried to commit suicide while playing in England and says it was as a result of the ...
Sport
6 months ago