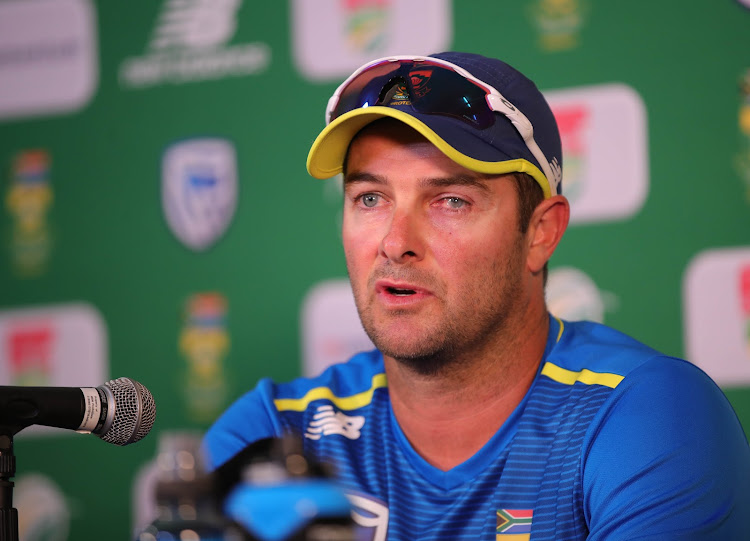 Proteas coach Mark Boucher says he will respond to the allegations of racism and discrimination that were made against him and other former national team players by erstwhile spinner Paul Adams.

Adams‚ who at some stages during his eight-year international career was the only black player or in the minority in the Proteas set-up‚ appeared before Cricket SA’s (CSA) Social Justice and Nation Building (SJN) transformation public hearings last week.

The former left-arm unorthodox spinner testified under oath at the hearings to investigate racial discrimination within cricket that Boucher and other white national teammates called him a “brown sh*t”.

Asked if he is expecting some sort of backlash when he returns back home from Ireland where the Proteas completed a 3-0 T20 series whitewash over their hosts in Belfast on Saturday‚ Boucher said he didn’t want to give a knee-jerk reaction.

“I fully understand the sensitivity around this‚ and I am not going to give a knee-jerk response‚” he said.

“As I said in my statement‚ I will go back home and assess information that is on the table and available to me and I will reply respectfully and appropriately to all the allegations and at the right time as well.

“I need to get home and look at what’s been said‚ and then I will come through with a response.”

With regard to cricket issues‚ Boucher said he was happy that captain and man-of-the-match Temba Bavuma finally returned to form with an impressive knock of 72 off 51 to make up for his recent struggles with the bat.

In the first T20 Bavuma only managed 13 runs and was dismissed for a duck in the second match‚ leaving him under some pressure.

“He has been putting in the hard work behind closed doors‚” said Boucher.

“He is a tough little character as well‚ he takes it personally if he doesn’t lead from the front with the bat.

“He is a type of guy who likes to run with a bit of form.

“But getting some runs‚ I think it’s the perfect time because we go to Sri Lanka after this and he will definitely take that confidence into the tour.

“As I said he has been working very hard and it was just a matter of time before he got some runs‚ and I am happy for him.

“It put us in a nice situation in the camp because he is doing well with the bat and he can lead with confidence now.

“He has been leading very well on and off the field‚ he just wanted to tick off the one little thing and get runs and thankfully he did that.”

Mark Boucher arrives back in SA tomorrow from Ireland with accusations of racist behaviour hanging over him after the Proteas coach got embroiled in ...
Sport
9 months ago

Covers must be lifted on claims by our cricketers

Cricket has been making headlines again recently, but as usual it's more about politics than the game itself, says the writer.
Opinion & Analysis
9 months ago

SA vs Ireland: Proteas do an Irish white out

SA completed a 3-0 T20 series whitewash over Ireland after they thrashed the minnows by 49 runs in the third and final match played in Belfast ...
Sport
9 months ago

Erstwhile Cricket South Africa (CSA) CEO Thabang Moroe has confirmed he has made a submission and will testify at the organisation’s transformation ...
Sport
10 months ago