CSA convener Victor Mpitsang: ‘Faf du Plessis not out of the running for the World Cup’ 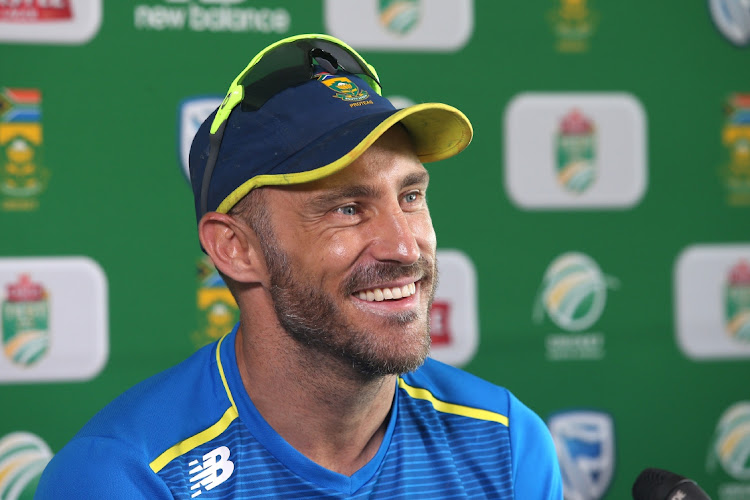 The Proteas are scheduled to play three ODIs and as many T20s against their hosts between September 2 and 14 at the R. Premadasa International Cricket Stadium in Colombo.

For the ODI series, SA will be without Lungi Ngidi due to personal reasons, Quinton de Kock, who has been rested, and David Miller, who is recovering from injury, and Du Plessis’ experience could have been valuable.

All-rounder Dwaine Pretorius has returned to the ODI and T20 squads while fast bowler Sisanda Magala has been included in the side. CSA convener of selectors Victor Mpitsang insists that Du Plessis is still in the frame for the T20 World Cup in October and November.

“Faf was not considered for this tour,” Mpitsang told TimesLIVE.

“Generally we’ve gone with the squad that went to the West Indies, where they were exposed to the conditions that are similar to those of the subcontinent.

"But he is not out of the running for the T20 World Cup, for now we’ve gone with this squad that we announced today [on Thursday].”

The 37-year-old Du Plessis, who last featured for the Proteas in ODI and T20 internationals in 2019 and 2020 respectively, retired from Test cricket earlier this year in a bid to prolong his limited overs career.

A veteran of 143 ODIs and 5, 507 runs, and 50 T20s, which yielded 1, 528 runs, Du Plessis was strangely left out by the selectors from recent limited overs series' against Ireland, the West Indies and Pakistan.

According to the International Cricket Council (ICC) Future Tour Programmes (FTP), the Proteas are scheduled to host the Netherlands when they return from Sri Lanka before going to the World Cup in the United Arab Emirates (UAE).

If Du Plessis makes a return to the side, it remains to be seen who he is going to replace in the top and middle order, as the Proteas have as many as seven players who all are jostling for starting places.

The International Cricket Council (ICC) is preparing a bid for the game's inclusion in the 2028 Olympic Games in Los Angeles, the governing body said ...
Sport
3 months ago

The new Cricket South Africa (CSA) domestic playing structure will be put into place after the organisation launched and conducted the draw for the ...
Sport
3 months ago

Ashwell Prince became the latest coach to be lost to the South African coaching system after the former Proteas star left-hander resigned at Western ...
Sport
3 months ago

The Proteas will be without key players in fast bowler Lungi Ngidi, wicketkeeper-batsman Quinton de Kock and batsman David Miller for the ODI series ...
Sport
3 months ago

SA’s much-anticipated limited overs tour to India in September and October has been postponed.
Sport
4 months ago

Former Cricket South Africa CEO Thabang Moroe has testified that he was persecuted by the organisation‚ which he says allowed the media to “demonise” ...
Sport
4 months ago