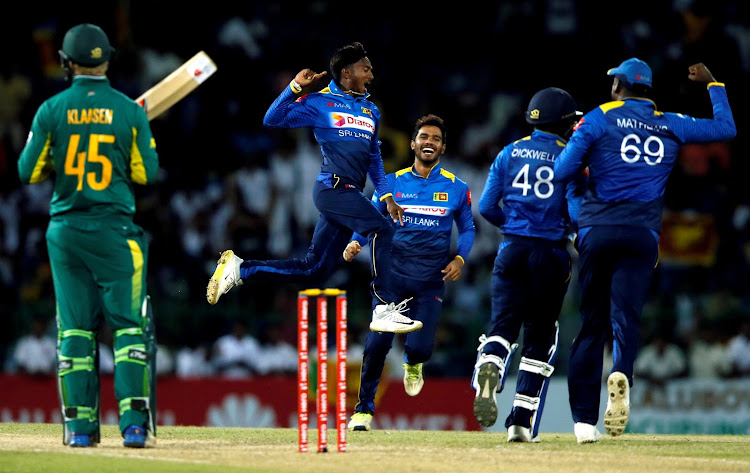 South Africa looked on course to win the match but lost a clutch of wickets in the end to fall short by 14 runs.
Image: REUTERS/Dinuka Liyanawatte

The Proteas'  problems got worse as they began their limited-overs tour of Sri Lanka in a dispirited manner, going down by 14 runs against the hosts in Colombo  in the opening game of the three-match ODI series on Wednesday.

The South Africans arrived in the island nation in turmoil with a dark cloud hanging over embattled head coach Mark Boucher, who has admitted to racists acts which he “deeply regrets”, and without assistant coach Enoch Nkwe, who quit  last week citing a toxic working environment.

But Temba Bavuma’s men showed no sign of toxicity in their play, until when it mattered the most at the death, as they put on a commendable bowling performance which they blemished with an unmeasured and unassured batting display.

The three-match ODI series has 30 crucial Cricket World Cup Super League points and the Proteas have lost 10 of those already.

Sri Lanka went into this match languishing in 11th on the Super League log standings, with only two wins from 12 completed matches, and are now eighth on 32 points. The Proteas are stuck on 24 points and go down a place to 11th. They have won only two of their completed seven Super League matches.

The Super League, comprised of 13 countries, is the new qualification pathway for teams for the men's 10-team World Cup in 2023 in India. Both teams are desperate for points.

The top eight teams, including host nation India, will automatically qualify while the other five countries will play in qualifiers with five other associate nations.

Only two teams from the qualifiers will go to the World Cup.

Having gone 1-0 down, and without run machines Quinton de Kock and David Miller for the remainder of the ODI series, the Proteas face a mountain.

Though the Proteas have played only seven matches, eight less than log leaders England, they don’t want to find themselves in a deep hole and scrambling for points to qualify or having to go through the ignominy of qualifying through the playoffs, against the five teams who will finish bottom of the 13-team table.

While the immediate focus is on the ensuing three-match T20 series that will follow on September 10, 12 and 14 at the same venue in Colombo, because the T20 World Cup starts in the United Arab Emirates and Oman in October and November and this is the Proteas last competitive preparation series, the stakes are much higher in the 50-over global showpiece.

After Sri Lanka won the toss and asked their visitors to bowl first at the R Premadasa International Cricket Stadium, Avishka Fernando etched his name in history as he became only the sixth Sri Lankan to score an ODI century against SA.

His intelligent 118 off 115, his third century for his country, and Charith Asalanka’s career-best 72 off 62 balls, complimented by Dhananjaya de Silva’s  solid 44 carried the hosts to an average but intimidating total of 300/9.

Though only twice before has 300 has been reached in the second innings at this ground, the Proteas had the match by the scruff of the neck but collapsed like flies as soon as Markram and Van der Dussen departed.

They lost a match they had no business losing and will have their backs against the wall on Saturday in the second ODI at the same venue.

The third and final ODI will be played on Tuesday September 7 followed by the three-match T20 series on September 10, 12 and 14 at the same venue in Colombo.

Former Proteas fast bowler Dale Steyn announced his retirement from all forms of the game this week, and the decision was met with glowing tributes ...
Sport
1 month ago

Beuran Hendricks can count himself lucky that he only needed a few stitches after he was hit by a shot from hard-hitting Proteas teammate Dwaine ...
Sport
1 month ago

Proteas limited-overs captain Temba Bavuma has said the team did not have an opportunity to say their goodbyes to former assistant coach Enoch Nkwe ...
Sport
1 month ago

Proteas captain Temba Bavuma insists that the players are fully focused on preparations for the limited overs series against Sri Lanka, which starts ...
Sport
1 month ago

We're preparing as best as we can in tough conditions, says Proteas all-rounder Pretorius

The Proteas have been in quarantine and training in small groups since arriving in Colombo last week and allrounder Dwaine Pretorius has said the ...
Sport
1 month ago

The Momentum Proteas return to international action on Tuesday with a three-match women’s T20 against the West Indies and bowling spearhead Shabnim ...
Sport
1 month ago

That the Proteas culture and team environment is toxic is a fact that was this week established, acknowledged and accepted by the new independent ...
Sport
1 month ago