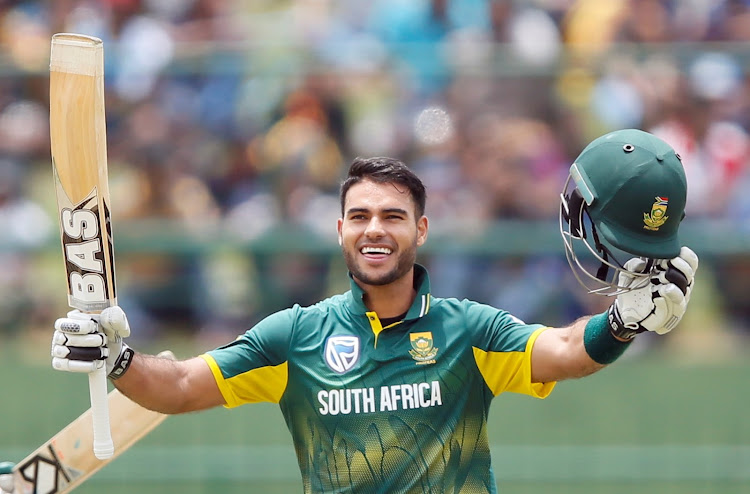 A file photo of Reeza Hendricks celebrating his maiden century in his debut ODI for the Proteas in the third and final match between Saa and Sri Lanka in Pallekele on August 5 2018.
Image: REUTERS/Dinuka Liyanawatte

Kimberley-born Reeza Hendricks holds the world record as the owner of the fastest ODI hundred by a debutant, having achieved the milestone against Sri Lanka in Pallekele three years ago.

Hendricks needed only 88 balls to smash a sizzling century in his debut match that set up the Proteas' series-clinching 78-run win over Sri Lanka in the third and final ODI series in August 2018.

But the now 32-year-old number three batter has been struggling for consistency ever since, and found himself in and out of the ODI team and eventually dropped in March 2019.

He got back in the team in February 2020 for the three-match ODI home series against England and struggled with scores of six, 35 [not out] and 11. He lost his place again.

The Lions top-order batter returned to the team again at the weekend in the ongoing three-match series against the self-same Sri Lanka in Colombo, and will be searching for consistency and to rekindle his Pallekele magic.

“I started well in the first couple of ODIs I played and probably did not do as well as I would have liked to and obviously got left out for a quite a period," Hendricks said of his struggles with consistency.

After missing out in the opening ODI match as the Proteas lost by 14 runs in a dramatic end to the match, Hendricks got the opportunity in the second, smashing a brisk 51 off 54 balls and sharing a 96-run partnership with centurion and match winner Janneman Malan [121 off 135] as the team won by 67 runs through the DLS method.

"To get an opportunity in the last game is something I have been working on to get back in to the team."

With the series tied at 1-1 going into the decider at the R Premadasa International Cricket Stadium on Tuesday [11am SA time], Hendricks will be keen to rekindle the memories of August 2018 if he is picked.

The Proteas looked to have had the opening match in their bag on September 2 before they lost it at the death but regrouped and showed improvements in their second.

How do the Proteas make sure the demons that troubled them in the first match do not trouble them again in this series-decider?

“I think it is just a mindset,” said Hendricks.

“Even in the first game the boys played really well. We came up short but it was a really good team performance.

“We maybe leaked a bit in the field, where 15 or 20 runs were too many, and we could not pull through with the bat in the first game.

“But it was a good game.

“It is just a mindset going into the third game and we will obviously love to play our best game there and come out on top.”

Hendricks was hardly troubled and quickly adapted to the pitch conditions as he scored his third ODI half-century in the last match to add to his only ton.

The three-match ODI series forms part of the crucial 2023 Cricket World Cup Super League points table where the Proteas are desperate for points.

The Proteas will again be without their captain Temba Bavuma, who suffered a finger unjury during the first ODI and was later ruled out of the remainder of the series, including the three-match T20 series on September 10, 12 and 14 at the same venue in Colombo.

Bowling spearhead Kagiso Rabada is progressing well following an ankle sprain which presented itself during the second ODI. He will go through a final fitness test before the series decider.

Cricket SA (CSA) is the custodian of all cricket activities in SA, and its board of directors is entrusted with ensuring compliance with its vision, ...
Opinion & Analysis
4 months ago

A combination of superb batting by centurion Janneman Malan and exceptional bowling by Kagiso Rabada and Tabraiz Shamsi inspired SA to a 67 runs (DLS ...
Sport
4 months ago

India opener KL Rahul was fined 15% of his match fee for protesting against the umpire's decision during his dismissal in the fourth test against ...
Sport
4 months ago

Proteas have suffered a huge injury blow in their limited overs tour of Sri Lanka with news that captain and top order batsman Temba Bvauma has been ...
Sport
4 months ago

The Proteas' problems got worse as they begun their limited-overs tour of Sri Lanka in a dispirited manner, going down by 14 runs against the hosts ...
Sport
4 months ago