Proteas captain Bavuma starts batting in the nets, expects to be fit for T20 World Cup 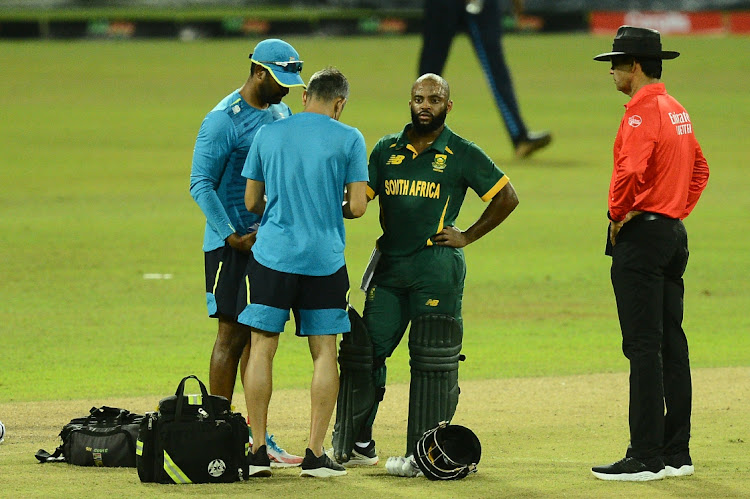 South Africa’s limited-overs captain Temba Bavuma has started batting in the nets after successful surgery on his thumb and expects to be fit for the T20 World Cup to be staged from October 17 to November 14 in the United Arab Emirates and Oman.

Bavuma got hit on his right hand thumb during the first of the drawn three-match ODI series against Sri Lanka in Colombo last month and subsequently missed the three-match T20 series which the Proteas won 3-0.

Four weeks after his injury and surgery, the 31-year-old said he started batting in the nets at the weekend as the team concluded its training camp in Durban before departing for the World Cup.

“We just finished our camp in Durban and I guess the camp was more about the guys brushing out their cobwebs over the break they have had since Sri Lanka,” said Bavuma.

“In terms of my thumb, I actually started batting. According to the doctor and the medical team, everything is still on schedule and I am quite happy with where it is at.

“It is obviously not 100% at the moment and so we will be building up, but everyone is happy with the progress.”

The Proteas World Cup entourage landed safely in Dubai on Monday and will move to their base is Abu Dhabi.

They will be joined by seven of the squad members who are taking part in the ongoing Indian Premier League (IPL), which is played in the United Arab Emirates.

“We are banking on those guys who are at the IPL to bring some good intel for us in terms of what to expect over there,” said Bavuma.

The team will quarantine for six days before they can start training as a group. The IPL will conclude on October 15.

Bavuma said the Proteas will do the bulk of their final preparations as a team in local conditions as soon as they are joined by the seven IPL players.

“We have six days or so of quarantine and thereafter we will be able to train as a team and that is where we will get the bulk of the job done.”

The Proteas have a warm-up match lined up against Afghanistan on October 18 and  will start their World Cup campaign against Australia in Abu Dhabi on October 23.

The team will play the West Indies on October 26 in Dubai and against the two yet-to-be-determined qualifiers on October 30 and November 2 before a confrontation with England in Sharjah on November 6.

While Australia, England and the West Indies are familiar foes, Bavuma said the Proteas face a challenge in having to prepare for the other teams in their pool which are yet to be determined.

“It is very hard to prepare against an opponent you do not know.

“So the ones that we know we have been preparing as well as we can for them and to make sure that we get over the line against them.

“As soon as we know who the other opponents are then we will prepare accordingly.

“I think the conditions will be the biggest dictator at the moment and [we will have to] see how the pitches are playing during the day and at night.”

Proteas limited-overs captain Temba Bavuma says the team is in a good space and stands a good chance of success at the ICC Twenty20 Cricket World Cup ...
Sport
10 months ago

UAE stadiums to be at 70% capacity for T20 World Cup, Oman reels from cyclone

Stadiums in the United Arab Emirates (UAE) will operate at 70% of capacity for the Twenty20 World Cup, the organisers said, though conditions in ...
Sport
10 months ago

Aussie skipper Paine says Ashes going ahead, with or without Root

SA strategic consultant JP Duminy was overcome by emotions when he packed his Proteas blazer and tie to link up with the national team at their pre ...
Sport
10 months ago