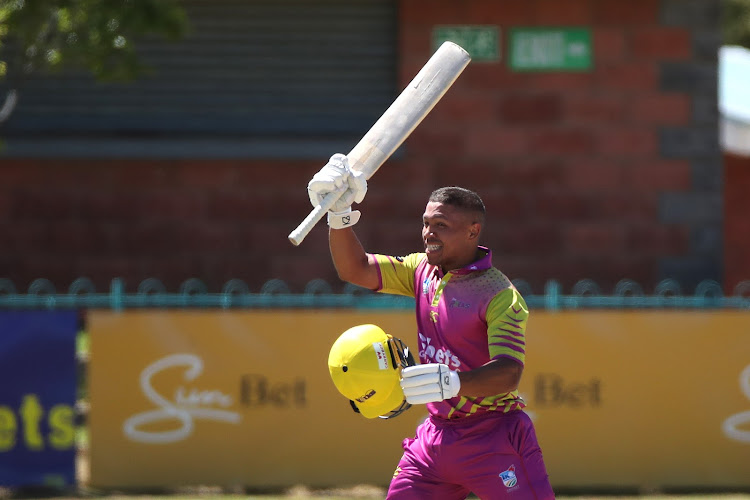 Clyde Fortuin was a member of South Africa's Under-19 national team that played at the 2014 World Cup.
Image: @Gavin Barker/BackpagePix

A maiden T20 century by Clyde Fortuin helped the Gbets Rocks to a 17-run victory in their opening Pool D match of the Cricket SA (CSA) Provincial T20 Knock Out Competition encounter against the Gbets Warriors in Kimberley.

In what was seen as more batter-friendly conditions, it was a surprising start by the Warriors, as they made early inroads after winning the toss and electing to field first.

The Sinethemba Qeshile-led side removed three of the top order — brothers, Janneman (5) and Pieter Malan (14) and Sinalo Gobeni (5) - cheaply before Fortuin and Christiaan Jonker (45 off 31 balls; 4 fours, 1 six) recovered their innings well with a century stand for the fourth wicket.

Mthiwekhaya Nabe was the standout bowler for the Port Elizabeth-based outfit, picking up 3 wickets for 49 runs.

In reply, the Warriors made an explosive start to their chase, with Matthew Breetzke notching up his fifth career T20 half-century in an 88-run, second-wicket partnership with Jon Jon Smuts, reaching 96-1 after 10 overs.

The scoring rate was slowed through measured bowling from right-arm off-break Imraan Manack (0/18) and Ziyaad Abrahams (3/27), before experienced campaigner, Ferisco Adams (2/27) sparked a middle-order collapse in the penultimate over.

The Warriors lost four wickets in the final two overs for 20 runs despite a destructive 30 off 16 deliveries (3 sixes) from Lesiba Ngoepe, before going on to being restricted to 166/7 at the end of their allotted overs.

In other news from the clash, there was a swarm of bees that invaded the field during the second innings’ powerplay. Meanwhile, Abrahams and Adams both missed out on hat-trick opportunities as they helped the Rocks open their account in Pool D.

Proteas limited-overs captain Temba Bavuma says the team is in a good space and stands a good chance of success at the ICC Twenty20 Cricket World Cup ...
Sport
2 weeks ago

UAE stadiums to be at 70% capacity for T20 World Cup, Oman reels from cyclone

Stadiums in the United Arab Emirates (UAE) will operate at 70% of capacity for the Twenty20 World Cup, the organisers said, though conditions in ...
Sport
2 weeks ago

Aussie skipper Paine says Ashes going ahead, with or without Root

Proteas captain Bavuma starts batting in the nets, expects to be fit for T20 World Cup

South Africa’s limited-overs captain Temba Bavuma has started batting in the nets after successful surgery on his thumb and expects to be fit for the ...
Sport
2 weeks ago

Castore, the British manufacturer of sportswear and athletic clothing, has partnered with Cricket South Africa (CSA) as an official apparel partner ...
Sport
3 weeks ago