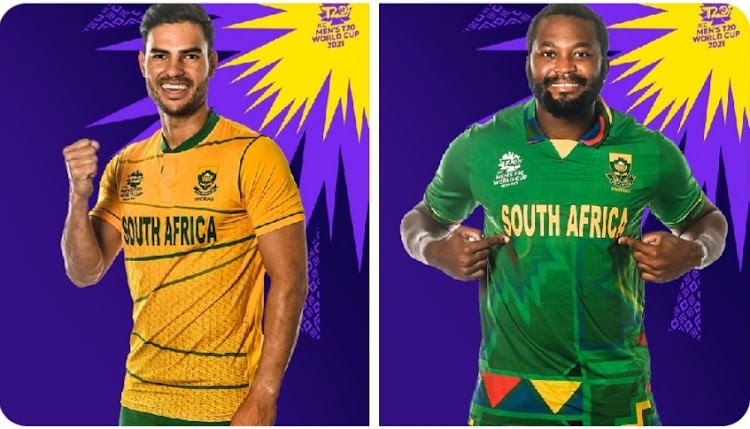 Cricket South Africa (CSA) and apparel partner Castore have revealed the playing kit to be worn by the Proteas during the upcoming ICC T20 World Cup in the United Arab Emirates (UAE) and Oman.
Image: CSA/Twitter

Cricket South Africa (CSA) and apparel partner Castore have revealed the playing kit to be worn by the Proteas during the upcoming ICC T20 World Cup in the United Arab Emirates (UAE) and Oman.

According to CSA, the design is inspired by Ndebele art and will be showcasing one of the country’s most colourful heritages on the international stage where captain Temba Bavuma and the Proteas will be representing the nation.

The shirt includes a collared neckline, which is a nod to the kit worn in the inaugural T20 World Cup in 2007.

The collar, along with the rest of the jersey, is immersed in elaborately-sketched patterns and graphic elements made up of strong geometric lines, including triangular and chevron shapes.

“It’s with great pride and excitement that we present the latest Proteas kit that will be donned by the Proteas Men’s T20 side, when they take on the world in the upcoming T20 World Cup,” said CSA acting CEO Pholetsi Moseki.

“The T20 format has always been about the thrill of dynamic cricket and ball-to-ball excitement. With our partnership with Castore now firmly in place, as CSA we feel that this new look epitomised the energy and spirit that we want to send our team to battle with, strengthened by the inclusion of a South Africa unique look and feel and inspired by a proudly Ndebele design.

“As the saying goes, ‘If you look good, you feel good’ and that’s the aim with this innovative design, as we prepare our men’s national side for the global event,” commented Moseki.

The colours on the first Castore World Cup kit are no stranger to the South African and international fan, with the famous green and gold underpinning the vibrant design.

The Ndebele art shapes then add a splash of bright colours, with the red, yellow, blue and the lighter shades of green.

Founder of Castore, Tom Beahon, explained the thinking behind the design: “The T20 World Cup is an extremely exciting time for international cricket and the Proteas team, and we wanted to produce a product which reflected that.

“The kit references the various cultures within South Africa which we hope amplifies the sense of pride the players will feel when pulling on the jersey at the World Cup.”

'My hand is getting stronger,' says Proteas captain Bavuma as he starts facing bowlers in the nets

Proteas captain Temba Bavuma will face bowlers in a net session at the team’s base in Abu Dhabi on Friday for the first time in more than a month ...
Sport
1 month ago

Blast from the past: White Lightning strikes against Zimbabwe