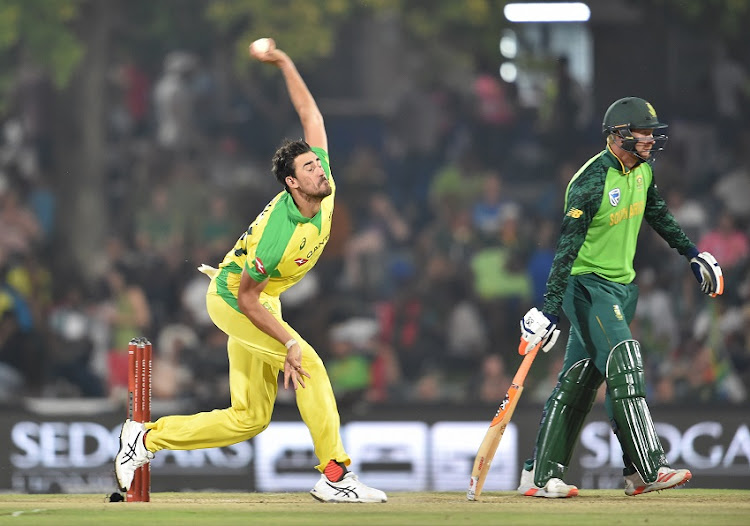 Mitchell Starc says Australia, who start their T20 World Cup against the Proteas of South Africa, will have to play their best cricket from the get go with only five pool matches to play.
Image: Johan Pretorius/Gallo Images

Paceman Mitchell Starc has warned Australia's rivals not to read too much into the team's recent poor form, saying the squad now assembled in the United Arab Emirates was preparing only to win the T20 World Cup.

Australia have lost 16 of their last 24 T20 internationals going back to the start of 2020, but Starc said there was good reason for those disappointing results.

"Over the last three years or so, we haven't always had our full-strength T20 team available," he told reporters from Abu Dhabi.

"Now we've got everyone available and we're looking forward to getting stuck in and hopefully showing the class that we have.

"We've set out to win the World Cup, we don't want anything less."

Australia's form has been particularly poor in the shortest format this year, with only two wins from 10 matches on tours of West Indies and Bangladesh.

"We had some really young, inexperienced players and some young guys ... thrown in the deep end really quickly," Starc explained.

"Yeah, not our best tour, but obviously now we've got our full-strength team available, guys coming off (the Indian Premier League) in really good form, it's up to us now."

Australia have been drawn in Super 12 Group 1 with West Indies, England, South Africa and two qualifiers.

With only five matches in the group and just the top two progressing to the semi-finals, Australia will need to hit their stride in their tournament opener against the Proteas in Abu Dhabi next Saturday, Starc added.

"You almost have to play some of your best cricket from the get-go," he said.

"It's important for us to play well against South Africa and hopefully carry that through the tournament.

"It's no secret that we haven't won a T20 World Cup, so I'm looking forward to hopefully being a part of our first one."