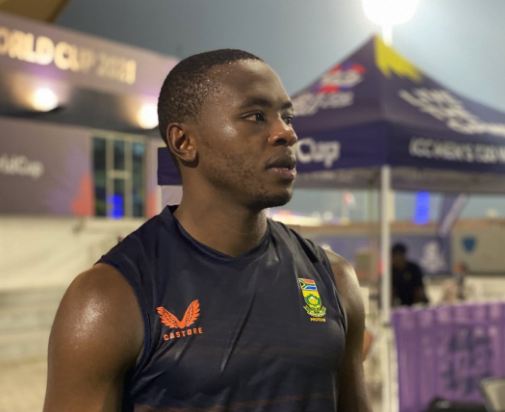 Kagiso Rabada has said South Africans can expect the Proteas to fight tooth and nail during the T20 Cricket World Cup in the United Arab Emirates and that the team is determined to bring the trophy back home.

The Proteas speed merchant spoke to the media from the team’s base in Abu Dhabi ahead of their first-warm up match against Afghanistan on Monday.

“Training went really well and it was good to be around the old teammates and back around some South Africans,” said Rabada, referring to himself and the other Proteas players who joined the rest of the team after their participation in the Indian Premier League (IPL).

“The mood is great and it is nice to be around some positivity.

“I think the guys are in a good space, especially after getting out of self-quarantine for six days, anyone would be in a better space.

“It is quite hot as we know, but I have just enjoyed reconnecting with my teammates.”

Rabada and Anrich Nortjé played for the Delhi Capitals in the semifinals of the IPL where they lost to the Kolkata Knight Riders.

The Lions speedster, Nortje, Quinton de Kock, David Miller, Lungi Ngidi and Aiden Markram were the World Cup squad members who featured in the tournament, which was played on the same surfaces, and will have more knowledge and experience of the pitch conditions in Dubai and Sharjah, where the Proteas will play the bulk of their matches.

“I have been playing and I don’t think I need to do too much more. I think it is just about locking it and executing game plans,” said Rabada.

South Africans will be on the edge of their seats on Saturday when the Proteas play Australia in their World Cup opener in Abu Dhabi at 2pm, SA time.

“Obviously the support from back home goes a long way and we are out here in the UAE preparing as hard as we can, and they can be guaranteed that when we do get on the field we will fight tooth and nail.

“We know that we can beat anyone on our day if we play well and apply ourselves and now it is just about taking it one step at a time into this World Cup.”

The Proteas will play the West Indies on October 26 in Dubai and against the two yet-to-be-determined qualifiers on October 30 and November 2 before a confrontation with England in Sharjah on November 6.

Cricket South Africa (CSA) and apparel partner Castore have revealed the playing kit to be worn by the Proteas during the upcoming ICC T20 World Cup ...
Sport
7 months ago

The 26-year-old Rabada is back in a country where he won a World Cup gold medal with the Proteas, the Under-19 team captained by Markram seven years ago.

“It feels great. There are obviously a lot of good memories from the Under-19 World Cup and it would be great to replicate that with the senior team.”

He said winning the trophy with the senior team would rank as his highest achievement in sport.

“That would be extremely special and it would probably be my biggest life achievement in sport. That is 100% sure, that is what it would be. We hope we have a generation that can win it.”

The SA senior national cricket teams go into their respective World Cup tournaments facing contrasting fortunes, with the women thriving while the ...
Sport
7 months ago

The T20 format is a key part of Cricket SA’s strategy to introduce new fans to the game, says skipper Temba Bavuma
Sport
7 months ago

Australia is eyeing a 2023 window to reschedule the three-test series of South Africa after pulling out of the tour earlier this year, Cricket ...
Sport
7 months ago