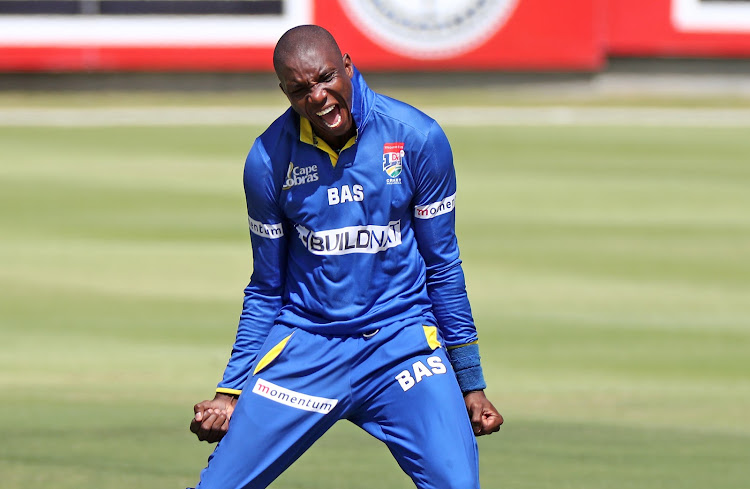 A file photo of Eddie Leie celebrating after taking a wicket for the Cape Cobras.
Image: Chris Ricco/BackpagePix

Johan van Heerden, the CEO of Free State Cricket in Bloemfontein, has denied allegations of racism made by former Knights and Proteas leg-spinner Eddie Leie.

Leie left Johannesburg for Bloemfontein to join the Knights in the 2017/18 season in search of regular game time to enhance his chances of keeping his place in the Proteas national team.

“Here there was blatant racism, and you dared not talk about it. They would ostracise you and make you suffer,” said Leie during his testimony at the Cricket SA (CSA) social justice and nation-building (SJN) transformation hearings in July.

The outspoken Leie mentioned a number of incidents where he said he felt he was discriminated against because he was black and targeted for his courage for speaking out against what he perceived as injustices.

Leie said he was baffled at Castelyn's remarks as Whitehead apparently used to be the last to arrive for training and first to leave, and yet was deemed to be doing more work than them.

Leie said he challenged Castelyn’s assertions and was seen as a destructive figure in the team after that.

Van Heerden said Castelyn has left the union and he cannot answer on his behalf.

“Unfortunately I did not attend those fitness training [sessions] and I would not know if Morne was doing anything unlawful,” said Van Heerden.

Leie said he even called EFF leader Julius Malema afters matters came to a head when he was left out of both the Knights and Free State teams. He said his omission was not based on performance.

Van Heerden said Leie was the fittest player, and his work ethic and energy were unquestionable. But he added it was the leg-spinner’s apparent lack of contribution in the longer format that was problematic.

Leie said he and the other black players were ostracised for far less than their white teammates and he referred to an incident where another white player, Cornal Dry, went on holiday with his wife “while blacks were busy being slaves”.

“Cornal Dry got married the week before and went to spend time with his wife on holiday. Cornal actually asked for permission at the beginning of the season.”

Asked by the ombudsman of the SJN and chairperson of the hearings advocate Dumisa Ntsebeza what Van Heerden understood Leie to be saying by the remarks that black players were “slaves”, the CEO said: “I think if he refers to Sean Whitehead. I read somewhere where Sean was treated differently than black players.

“I took the two incidents with Cornal and Sean as blacks being slaves.”

While Van Heerden agreed with some of Leie’s allegations, like providing substandard accommodation for young black cricketers as recently as 2019, the CEO denied any form of racism.

“In response to that we can unfortunately not agree with the racism part,” Van Heerden testified at the SJN hearings.

During his testimony, Leie said he went to Johannesburg on one of their weekends off in 2018 for a friend’s wedding where he was the best man.

Leie said he met Van Heerden in the lift at Monte Casino Hotel in Fourways and was surprised to receive a call from head coach Nicky Boje five minutes later.

Leie said Boje asked him why he was in Johannesburg, to which the player replied that it was a weekend off and he travelled to be with his family.

Boje, said Leie, threatened him with a warning letter for apparently leaving his place of work. Leie, who was studying law at the time, said he knew Boje’s threat was unlawful and contested it.

“Yes, that is the case, I saw Eddie at Monte Casino. We actually performed very poorly and when I saw Eddie in the lift the night before I called Boje and enquired why the team had a weekend off.

“But the intention was not to find out if he was illegally there at Monte or [not]. It was to find out why is the team off for the weekend and not doing well.

“Boje most probably did phone him and ask him about his whereabouts but I don’t know if Nicky threatened Eddie with a warning letter.”

Leie said the daggers were out for him since that incident.

“We strongly disagree with the fact that it was a personal issue and that daggers were out and that was the reason why he was not selected.

“Eddie’s stats were not the best in his last year with us.”

Asked by the SJN hearings legal assistant advocate Fumisa Ngqele if he believes black players were happy at the Bloemfontein union, Van Heerden said: “No. I don’t believe so.”

But Van Heerden believes his union has  the right values and ethos.

“We have a team set-up that I believe is culturally the best in SA.”