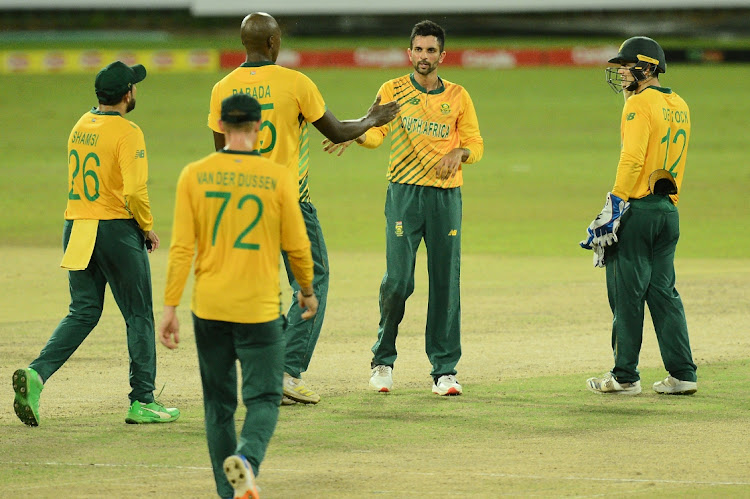 Kagiso Rabada is one of the senior players at age 26.
Image: Isuru Sameera Peiris

Fast bowler Kagiso Rabada believes the Proteas' shortcomings in previous global tournaments will count for nothing during the T20 World Cup in the United Arab Emirates in the coming days.

But Rabada said he would rather not dwell too much on history.

The Proteas are best known for their heartbreaking losses in World Cup tournaments, as happened in the 2011 quarterfinal and the 2015 semifinals, and two years ago when they crashed out in the pool stages.

“I don’t even like to talk about that, the baggage and what has happened in the past. I don’t want to talk about it too much,” Rabada said ahead of the team’s opening World Cup match against Australia in Abu Dhabi.

Kagiso Rabada has said South Africans can expect the Proteas to fight tooth and nail during the T20 Cricket World Cup in the United Arab Emirates and ...
Sport
7 months ago

“No one in the past has tried to lose games and we are coming in with the same mentality.

“I think it is not even worth talking about. We just have to play.”

The Proteas will play the West Indies on October 26 in Dubai and against two yet to be determined qualifiers on October 30 and November 2 before a confrontation with England in Sharjah on November 6.

“We are a team that wants to express to the world how good they are. We have a challenge in front of us.”

The Proteas beat Afghanistan by 41 runs in Abu Dhabi on Monday in their first warm-up match as captain Temba Bavuma employed a three-pronged spin attack of Tabraiz Shamsi, Keshav Maharaj and Bjorn Fortuin.

The match marked Bavuma’s return from a finger injury he sustained in Sri Lanka last month, but the skipper came through well with a contribution of 31 runs as the Proteas defended a modest 146 run target.

The Proteas have a second and final warm-up match against Pakistan on Tuesday before taking on Australia at the Sheikh Zayed Stadium on Saturday at 2pm SA time.

Cricket South Africa (CSA) and apparel partner Castore have revealed the playing kit to be worn by the Proteas during the upcoming ICC T20 World Cup ...
Sport
7 months ago

SA comes off successful tours where they won in Sri Lanka and the West Indies in the build up to the World Cup, with Rabada saying the team’s preparations have gone according to plan.

“The confidence levels are there and we have been rebuilding as a team and so far it has been going according to plan.

“We know we can beat anyone on our day if we play well and apply ourselves. It is  about taking it one step at a time going into this World Cup.”

Free State Cricket CEO Johan van Heerden has admitted that the union made young black cricketers to stay in an old stadium gymnasium under the stand ...
Sport
7 months ago

Johan van Heerden, the CEO of Free State Cricket in Bloemfontein, has denied allegations of racism made by former Knights and Proteas leg-spinner ...
Sport
7 months ago

The SA senior national cricket teams go into their respective World Cup tournaments facing contrasting fortunes, with the women thriving while the ...
Sport
7 months ago

Australia is eyeing a 2023 window to reschedule the three-test series of South Africa after pulling out of the tour earlier this year, Cricket ...
Sport
7 months ago