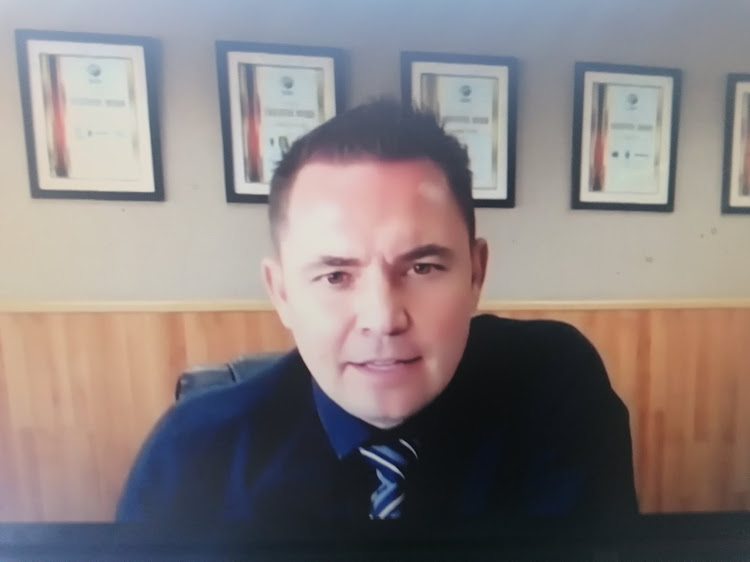 KZN Cricket CEO Heinrich Strydom has defended the union's decision to overlook Roger Telemachus for the Inland team coach job and said race had nothing to do with it.
Image: Screengrab from Cricket SA's YouTube

KZN Cricket CEO Heinrich Strydom came under sustained questioning as he attempted to offer a response to Roger Telemachus’ claims that he was unfairly overlooked for a top coaching job, despite being the most experienced, suitable and qualified candidate.

Strydom defended the union’s decision to appoint Michael Smith for the KZN Inland team over former Proteas fast bowler Telemachus, who has been on the union’s payroll as the Coastal side coach for the past seven years.

Telemachus gave testimony at Cricket SA’s (CSA) Social Justice and Nation-building (SJN) transformation hearings in July and said white coaches get senior jobs with less qualifications and experience at the expense of black mentors like him.

Telemachus testified that to his knowledge, Smith was a high school coach and has not coached in franchise or provincial cricket prior to his appointment as KZN Inland boss.

Free State Cricket CEO Johan van Heerden has admitted that the union made young black cricketers to stay in an old stadium gymnasium under the stand ...
Sport
6 months ago

Telemachus, who holds the highest coaching qualification in world cricket, level four, was interviewed along with Smith, who only has a level three with no coaching track record in domestic professional cricket.

Telemachus said he was unfairly discriminated against and called for fairness and a relook of the process of the appointment of coaches not only in KZN Cricket but at all levels countrywide.

Speaking in response to Telemachus at the same hearings this week, KZN Cricket CEO Strydom rejected allegations of bias and discrimination and said “from a procedural point of view all was well” during the appointment of the coach.

“The requirement for the position was level three and all candidates qualified and yes, Roger has a level four, which is a big positive, but also we have worked with Roger for a quite a long period and we knew what he was going to bring to the table.

“But the committee just felt that Mr Smith presentation was very impressive and he also met all the requirements we had,” said Strydom.

Johan van Heerden, the CEO of Free State Cricket in Bloemfontein, has denied allegations of racism made by former Knights and Proteas leg-spinner ...
Sport
6 months ago

Advocate Dumisa Ntsebeza, chairperson of the SJN hearings, asked Strydom if Telemachus can be faulted for concluding that he was discriminated against given Smith’s lesser qualification and experience at franchise or provincial level.

“I can confirm that Mr Smith was not a head coach at any provincial level before and the fact that he has not got a level four coaching certificate,” said Strydom.

“But that is not the reason why we appointed him. The committee felt that Mr Smith had international experience and he still worked in the Pakistan Super League earlier this season as well.”

Ntsebeza put it to Strydom that Smith’s international experience was not as a coach but mostly on a consultancy basis. Strydom said Smith also has experience coaching international player on a one-on-one basis.

“He has worked with various Proteas players and we obviously spoke to quite a few [of them], and the people that have worked with him and gave a positive feedback,” said Strydom.

Former leg-spinner Eddie Leie, who alleged he suffered depression as a result of discrimination and racism he experienced during his time in the Free ...
Sport
6 months ago

Evidence leader Sandile Tom reminded Strydom that Telemachus represented the Proteas and asked how the union balanced the requirement of international experience either from a playing or coaching perspective.

“In our requirements you did not have to have been an international cricketer or having played at the highest level.

“I don’t think being a good player makes you a good coach, but certainly in our requirement you had to have a level three coaching qualification as a minimum,” said Strydom.

Ntsebeza asked Strydom to make a satisfactory argument that there was no bias and that Telemachus was not overlooked because he was black.

“First and foremost, the process that we followed was very open and transparent,” Strydom insisted.

“We did not just look at the issue of experience. We looked at feedback of people we spoke to, the feedback from the players and we [then] made the decision that Mr Smith was the best candidate to take KZN cricket forward.”

Ali Bacher has come out to bat for beleaguered South African cricket coach Mark Boucher, who is embroiled in a racism storm.
News
8 months ago

Strydom said Telemachus’ record over the seven years he has been with KZN Cricket is average, despite the coach having won three trophies with limited resources.

“We also had various interviews and a lot of people actually had a strong view that KZN Cricket has been overly accommodating to Mr Telemachus in this regard due to his performances as a coach over the years.

“His record is too modest,” Strydom said.

But Smith, the successful candidate, is on his first professional full time coaching job.

“I think what stood out for Smith was the impressive interview and his plans for KZN Cricket.”

Strydom also said the union consulted with the players Telemachus coached and that the “feedback from them generally was not too positive”.

The department of sport would back the creation of a platform to investigate racial discrimination in rugby similar to the transformation hearings ...
Sport
9 months ago

Telemachus said during his testimony he was told by Strydom that Smith brought “more value and credentials” to the KZN Cricket when he phoned to ask why was he was not appointed.

“It was never about Smith bringing more value and credentials to the table, and race has never played a role in any of the appointments at KZN Cricket.,” said Strydom.

Telemachus played professional cricket for almost two decades and made his Proteas debut in 1998. He played in 40 limited-overs for the Proteas until his retirement in 2009.

Telemachus took over from Omar Henry as player and coach at Stellenbosch University a couple of months after retiring. He moved on to KZN where he has been coaching the Coastal side for the past seven years until his contract was nullified after the domestic restructuring.

Over the years, the 48-year-old coach has upskilled himself and is now armed with a level 4 certificate, the highest coaching qualification in world cricket.

Kagiso Rabada has said South Africans can expect the Proteas to fight tooth and nail during the T20 Cricket World Cup in the United Arab Emirates and ...
Sport
7 months ago

Fast bowler Kagiso Rabada believes the Proteas' shortcomings in previous global tournaments will count for nothing during the T20 World Cup in the ...
Sport
6 months ago