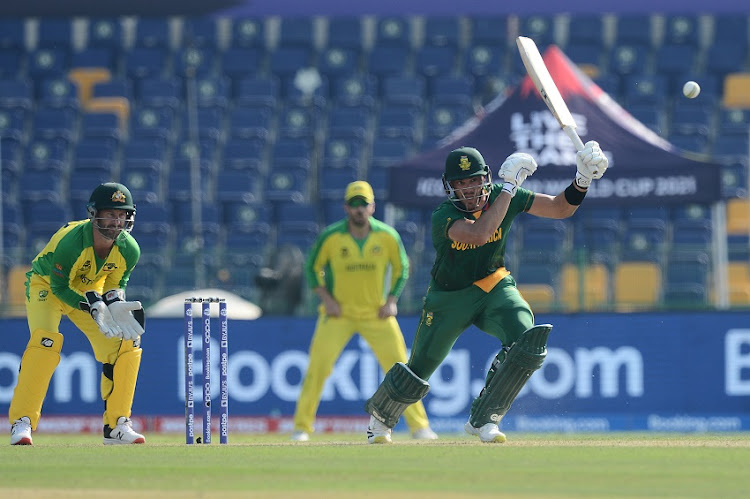 SA started their ICC T20 World Cup campaign on a disappointing note after they lost to Australia by five wickets at the Zayed Cricket Stadium in Abu Dhabi on Saturday.

Australia captain Aaron Finch won the toss and chose to field first and they went on to restrict SA to a below par score of 118/9 in their 20 overs where their batters once again disappointed.

In reply, Australia reached 121/5  with two balls to spare to get their campaign off to a winning start and the Proteas will be under tremendous pressure to beat the West Indies in their next match on Tuesday.

Aiden Markram was SA’s best batter with 40, followed by Kagiso Rabada on 19, and Mitchell Starc, Josh Hazlewood and Adam Zampa ended their bowling shifts with two wickets each for Australia.

Other notable contributors with the ball for the Aussies were Glenn Maxwell and Pat Cummins with one wicket each as they destroyed the poor Proteas batting line line-up where Markram was the only player to score more than 20 runs.

To put SA’s poor batting display in perspective: with the exception of Markram (40) and Rabada (19), the combined score of the rest of the SA batters was 53 runs.

Australia’s chase got off to a shaky start with Rabada conceding only two runs in the first over and Nortje removing the dangerous Finch without scoring as the Proteas got off to a good start.

Rabada was back in the thick of things in the fifth over when he claimed the wicket of the mightily dangerous David Warner who was caught by Klaasen at backward point for 14 runs.

Australia continued to be on shaky ground and they lost their third wicket when Mitchell Marsh was caught by Rassie van der Dussen off the bowling of Keshav Maharaj to leave them 23/4 in the eighth over.

Australia lost Steve Smith (35), who was caught by Markram off Nortje, and Glenn Maxwell (18), who was bowled by Tabraiz Shamsi, but Marcus Stoinis and Matthew Wade held together with an unbeaten partnership of 40 to help Australia to cross the line.

With ball in hand, Nortje was the best for the Proteas as he returned with two wickets while Rabada, Maharaj, Shamsi took one each and their efforts were not enough to defend what was a below average score.

SA have gone with two spinners for their opening match of the Super 12 stage of the ICC T20 World Cup against Australia at the Zayed Cricket Stadium ...
Sport
2 months ago

Former champions India and Pakistan will face off on Sunday in a Twenty20 World Cup blockbuster in Dubai and the buzz around the game underlines the ...
Sport
2 months ago