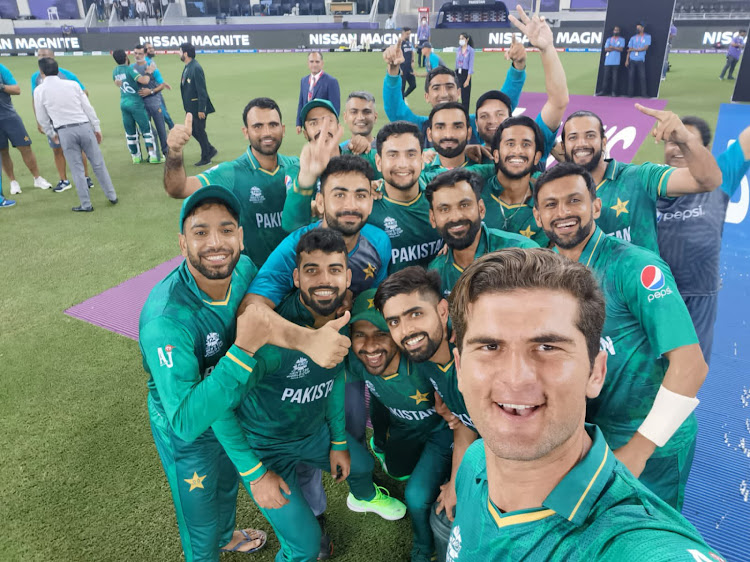 Pakistan players celebrate after recording their first win over India at the World Cup.
Image: @iShaheenAfridi/Twitter

People poured onto the streets and set off fire crackers to celebrate Pakistan's first win over arch-rivals India at the World Cup on Sunday, with Prime Minister Imran Khan among those hailing the victory by Babar Azam's side.

Heading into the T20 World Cup's Super 12 match in Dubai, Pakistan had never defeated their neighbours in 12 previous meetings at a global tournament but ended that drought with a thumping 10-wicket win.

"Congratulations to the Pakistan team and especially to Babar Azam who led from the front, as well as to the brilliant performances of (Mohammad) Rizwan and Shaheen Afridi," Pakistan Prime Minister Khan, a former World Cup winning captain himself, wrote on Twitter.

"The nation is proud of you all."

Captain Babar Azam led by example as Pakistan beat India in a World Cup showdown for the first time ever with a 10-wicket romp in a Super 12 ...
Sport
3 months ago

The decisions are likely to hamper the country's efforts to persuade top teams to tour and infuriated Pakistan's players.

Cricket board chief Ramiz Raja had asked the players to channel their anger at the tournament and they responded superbly.

SA started their ICC T20 World Cup campaign on a disappointing note after they lost to Australia by five wickets at the Zayed Cricket Stadium in Abu ...
Sport
3 months ago

"It's the first one, the most magnificent one, but remember journey has just begun ... such a proud moment for all Pakistanis and thank you boys for providing us this moment to cherish," Raja said on Twitter.

Former India players also praised Pakistan but backed their team to bounce back and contend for a spot in the semi-finals.

"Am sure they will learn from their mistakes and come back stronger. But I must compliment Pakistan for their brilliant win. They were a better team today," said former India off-spinner Harbhajan Singh.

"India have plenty of work ahead, but have the pedigree to bounce back quickly," said former batter VVS Laxman.

SA have gone with two spinners for their opening match of the Super 12 stage of the ICC T20 World Cup against Australia at the Zayed Cricket Stadium ...
Sport
3 months ago

Scotland are brimming with confidence ahead of their Super 12 clash against Afghanistan and the side want to use the T20 World Cup as a platform to ...
Sport
3 months ago

SA cricket captain Temba Bavuma forthrightly admitted that his team’s poor total of 118/9 in their five-wicket defeat yesterday by Australia in ...
Sport
3 months ago

SA captain Temba Bavuma has said there is a lot they must improve on after their disappointing display with the bat in their five-wicket loss to ...
Sport
3 months ago