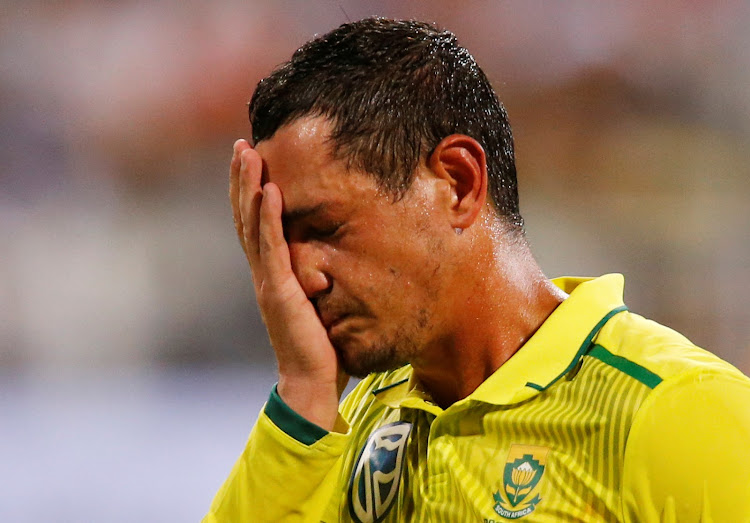 Quinton de Kock refused to take the knee as a sign of solidarity with the Black Lives Matter movement.
Image: Reuters/Rogan Ward

What have you done, Quinny?

This was my initial reaction when the nation was told one of our best players had opted out of the crucial ICC T20 World Cup match against the defending champions, the West Indies, in the United Arab Emirates (UAE).

The 28-year-old Quinton de Kock, better known as Quinny, made himself unavailable for the match because the board of Cricket SA  (CSA) issued a directive to all the team members to take the knee before the contest and support the Black Lives Matter (BLM) movement.

Whether you agree with Quinny or not, this decision was always going to rock the boat because he will be viewed as a privileged white man who comes across as insensitive or refusing to support or show solidarity with the BLM movement.

There is also the knee-jerk reaction of the CSA board who, in their infinite wisdom, saw it proper to issue an instruction to the players to take the knee a few hours before an important match against the West Indies.

A lot has been said and written about De Kock in the last 24 hours or so, but unfortunately the man at the centre of the storm has not come out to explain his highly controversial decision.

Maybe one day he will have the courage to talk about the “personal reasons” that stopped him from supporting the BLM movement, but what we know is t his decision is going to have far-reaching consequences for his personal life and career.

This may be the end of his international and franchise career with the Titans, and it may also affect his prospects of playing in lucrative leagues like the Indian Premier League (IPL), where cricket players make money.

De Kock had every right to decide not to take the knee if he doesn’t agree with the principles of the BLM movement, but I completely disagree with his stance from a moral perspective because of the history of oppression in our country.

De Kock is wrong not to take the knee because this gesture is part of a continuous process to educate racists that black lives do matter, and we must use his star power to influence and change the perceptions of white supremacists.

I also think the CSA board cannot escape blame for this mess because if they were serious from the beginning about taking the knee, all the team members should have been informed about this decision before they departed for the World Cup.

In August last year the Proteas went on a culture camp to discuss new team values, but these talks did not include taking the knee. Pertinently, the team did not take the knee when they returned to international cricket last year against England, against Sri Lanka during the Boxing Day Test in Centurion and other series after that.

It is a sign of the poor leadership in the CSA board that they did not anticipate the gesture of taking the knee would be a part of the World Cup, especially with other national teams having continuously supported it in the past.

By forcing the players to take the knee, it was a reactionary exercise by the board following the huge outcry after the Australia match where some Proteas players took the knee and others didn’t.

Going back to the issue of De Kock, as a middle-aged white man living in SA, he must be alive to the facts that this country has an ugly past in which black people were systematically oppressed.

He supports the Pink ODI to raise awareness and money for the treatment of cancer, and he supports efforts to conserve rhinos, so why should it be that difficult for De Kock to support the equally important issue advanced by the BLM movement?

In the current Proteas squad, De Kock mixes and works with people of different races and backgrounds, but given the furore, how are his black teammates and the staff members supposed to deal with him when he is perceived to be insensitive to issues of race?

The Proteas have another must-win match against Sri Lanka on Saturday and, as things stand, he remains an elephant in the room in the camp as a decision on his future remains in the report of team management.

The CSA board was clear that all team members must take the knee for the remainder of the World Cup matches, and the only way out of this is for him to be convinced to change his mind.

What is CSA going to do if De Kock refuses to change his mind?  Will he be sent home?, What is going to happen to him after the World Cup because SA have a bumper summer of fixtures? So many questions.

All these questions remain unanswered until the report and recommendations of the team management are made public. The bottom line is that this report will have far-reaching consequences for De Kock.

He is a talented young man who is important for the Test, ODI and T20 sides, but he has put himself in sticky wicket here.

What have you done, Quinny?