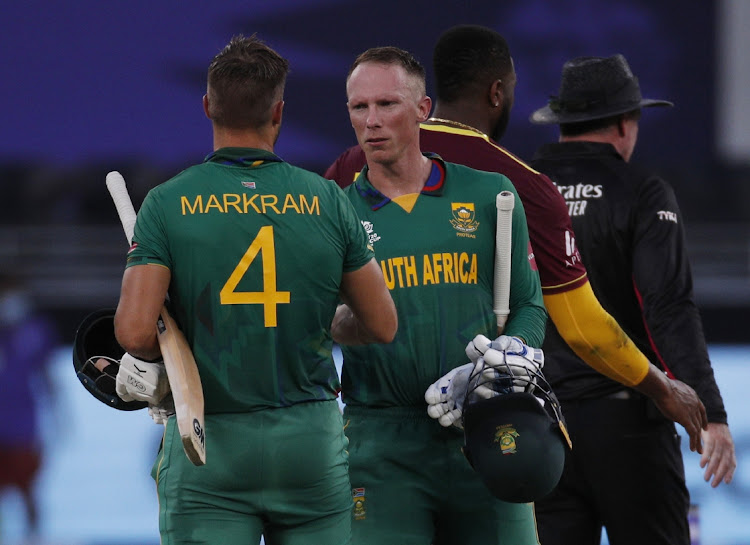 The explosive left-handed De Kock caused an uproar on Tuesday when he made himself unavailable for SA’s second ICC T20 World Cup match against the West Indies after the Proteas players were ordered to take the knee.

De Kock apologised on Thursday and Van der Dussen, who is one of the Proteas players to show solidarity with the Black Lives (BLM) movement by taking the knee, said they will welcome him back.

“'Quinny' (De Kock) is one of the best players in the world, of course the team will welcome him back with open arms,” said Van der Dussen, as SA prepared to take on Sri Lanka in their third match of the tournament at the Sharjah Cricket Stadium on Stadium.

“It is not even the case of him asking us. I mean, we understood why he did what he did and it is the end of the story. If he is selected, and I am sure he will be, he will come back and it will be like nothing ever happened because nobody held any grievances against him.

“He will just come back and hopefully it will be like it always was and he can be in the right frame of mind to deliver match-winning performances like he has done for so many years.

“He is a valuable player to the team and having Quinny on the field as our brother, our friend and our world-class player will be good.”

Van der Dussen said De Kock is remorseful for the episode that divided people in the country.

“Quinny is extremely remorseful, I can say in a positive way. I think the characteristic of our team is that even though he took that decision, everyone understood why he took it.

“We have always supported him, even though the timing might not have been great and it was a bit chaotic in the build-up to the match, but we all understood and supported him.

“And I think that speaks volumes about where we are as a team, the squad and the management, where we don’t judge but we accept and we expect everyone to think for themselves.

“The team is always an open environment to anyone who is a member. He didn’t even have to explain to us really. We sort of accept everyone as they come, we have come a long way and our team is a safe space for the guys.”

‘I am not a racist,’ says apologetic Quinton de Kock as he commits to taking the knee and to the Proteas

Proteas opening batter and wicketkeeper Quinton de Kock has apologised to teammates and fans for the furore he caused by refusing to take the knee ...
Sport
7 months ago

Rulani Mokwena believes Quinton de Kock erred by not taking the knee, but commended him for apologising
Opinion & Analysis
7 months ago

What you said: It’s Quinton de Kock’s decision whether to take a knee or not

Was De Kock right to refuse to take a knee or should he have knelt as a show of unity?
Sport
7 months ago

His choice or 'caring more for Rhinos than people'? SA weighs in on Quinton de Kock refusing to take a knee

"They say actions speak louder than words, and Quinton de Kock has spoken into a megaphone," said one social media user.
Sport
7 months ago

Proteas captain Temba Bavuma wants the players to focus on the team and on cricket matters as they move on from the Quinton de Kock controversy that ...
Sport
7 months ago