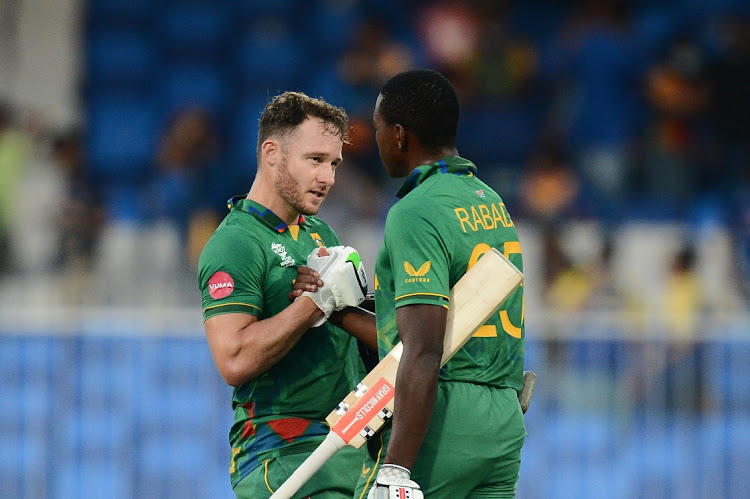 David Miller (left) and Kagiso Rabada at the crease. Miller wants his team-mates to get the basics right against England.
Image: Isuru Sameera Peiris

To be able to get the better of England during the highly anticipated ICC T20 World Cup match in Sharjah on Saturday and stay in contention for the semifinals, the Proteas will have to master the basics.

This is the view of SA middle order batter David Miller as the Proteas prepare for the must-win match that will give a clearer indication of whether they progress to the semis or crash out of the tournament.

South Africa go into their last match of the group stages against England in an unenviable position, as progression to the semifinals is not entirely in their own hands.

“It’s a massive game for us and we know that. What we have done really well is not looking at the end result but just to stick to our processes,” he said.

“I know that it is a very big cliché but at the end of the day we have to do this, we have to take it ball by ball, take it over by over and be clear in our planning, which is what we have done really well throughout the competition.

“At the end of the day, it is going to be batter versus bowler, bowler versus batter and we have to simplify what we need to do and really enjoy what we have to do as well.”

The other important factor Miller pointed out was that they go into this match with momentum, having won three matches in a row and they are finding ways to win matches.

“We have played the similar squad now for the past six to seven months and we have built up a really nice bond among ourselves. We have a nice blueprint which we have been striving to perfect.

“We are still learning and we are still growing but what we have shown so far is huge. I am really chuffed about where the team is at the moment, because we are finding ways to win whether it is batting or bowling.

“The last six months it's something we have done. I don’t know the exact stats but I think it is 11 out of 12 matches where we have won. Hopefully we can keep that momentum all the way through.

“It doesn’t necessarily have to be pretty. We have had some really good games, where we have been smooth right through but got nothing and we have had matches where we were not at our best but managed to win.

“As a team you build confidence by playing with each other for a long time. You understand how pressure works on each other, you know what you need to say to someone and encourage him on how not to feel the pressure and that’s what we have done really well over the past few months.

“In terms of the cricket, we bounced back from the first loss to Australia and the last three matches have been really good. Going into the next game, we are nice and focused.

“I think we are just taking every game as it comes and we are in a good space. The guys have freshened up, they are nicely focused and they are enjoying it at the same time.”

Former Proteas opening batter Alviro Petersen says the South African top order must fire on all cylinders when they take on England in the must-win ...
Sport
9 months ago

The Proteas consolidated a top two position in Group 1 and enhanced their chances of advancing to the semi-finals of the T20 World Cup after they ...
Sport
9 months ago

What must happen for SA to reach T20 World Cup semifinal

With one match remaining in the group stages of the ICC T20 World Cup, the prospect of SA qualifying for the semifinal stage is not entirely in their ...
Sport
9 months ago