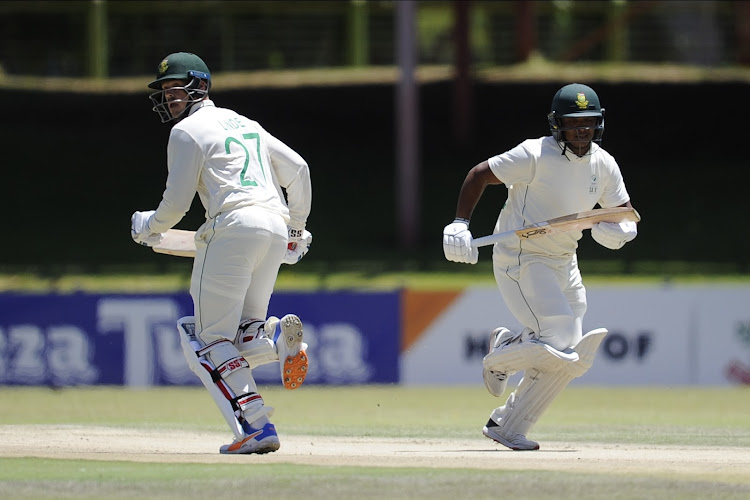 Sinethemba Qeshile (82 off 112 balls) and George Linde (51 off 80 balls) combined well for a 102-run partnership for the sixth wicket.
Image: Cricket South Africa

SA A posted an emphatic first innings total, declaring at 509 before India A closed out day two of the opening four-day match on 125/1 at the Mangaung Oval in Bloemfontein on Wednesday, still trailing by 384 runs.

The action is available to stream live on SuperSport’s YouTube channel.

Resuming play on 343/3 with in-form batters Pieter Malan (163) and Jason Smith (52) at the crease, the SA A side lost two quick wickets in the morning after adding seven runs to the overnight score, with Malan and Smith falling to Navdeep Saini (2-67) and Arzan Nagwaswalla (2-75) respectively.

Tasked with an uphill battle in their first innings response, the subcontinent visitors began brightly out in the middle, recording 80 runs for the opening stand before Lutho Sipamla (1-28) removed Prithvi Shaw (48).

Captain Priyank Panchal (45*), alongside Abhimanyu Easwaran (27*) guided India A to within 384 runs of their opponent’s first innings score at stumps, with two days left to play.

The Proteas will continue to take the knee as a team for the home international summer season and beyond, starting with the three-match ODI series ...
Sport
1 week ago

The SA A side overcame a tricky start on day one of their first four-day match against India A thanks to crucial centuries from captain Pieter Malan ...
Sport
1 week ago

The SA A side are focusing all their attention on securing a victory when they take on their subcontinent counterparts India A in the first of three ...
Sport
1 week ago