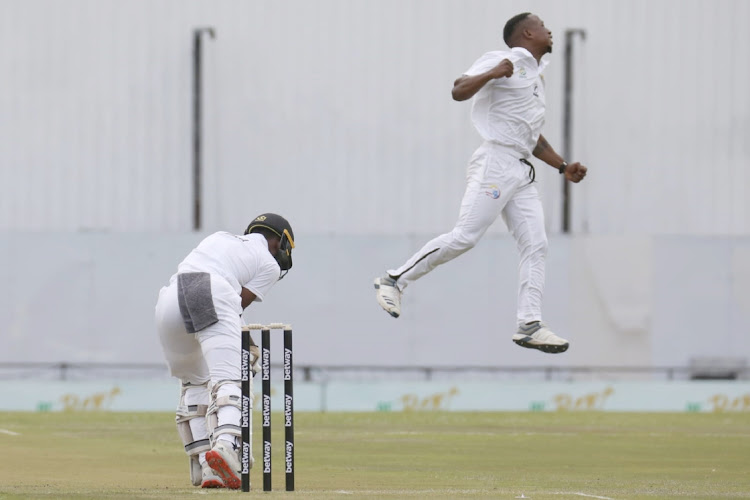 Mpumalanga Rhino's Bamanye Xenxe was supposed to be playing against Easterns Storm this weekend but CSA has postponed Round 4 matches due to positive Covid-19 cases.
Image: Alan Eason

Cricket SA (CSA) has decided to postpone all three Division Two matches of the 4-Day Domestic Series that were scheduled to start on Thursday across the country.

According to the fixture list, Eastern Cape Iinyathi were supposed to host Northern Cape Heat at Buffalo Park in East London and South Western Districts were due to take on Limpopo Impalas in Polokwane.

In the other match of Round 4, Mpumalanga Rhinos were supposed to host Easterns Storm in White River.

CSA explained that they postponed the matches because the competition is not being held in a biosecure environment (BSE) and there have been positive Covid-19 test results following team pre-arrival testing over the last few days.

“Activating the precautionary and preventive measures stipulated in the organisation’s Covid-19 protocols to ensure the health, safety and wellbeing of all involved is a top priority for CSA.

“CSA is monitoring the situation closely and a decision regarding the remainder of the fixtures this year will be made in due course as it develops. In addition, the CSA B-section 3-day and 1-day matches featuring Northerns and Easterns set for the same weekend have also been postponed until 2022,” said CSA in a statement.

In a bid to ensure the incoming and money spinning tour by India goes ahead next month, Cricket SA have reiterated their capability to institute ...
Sport
7 months ago

The SA A side are eager for an improved performance with ball in hand when they take on their counterparts India A in the second four-day match at ...
Sport
7 months ago

ODI series between Proteas and the Netherlands postponed

The three-match ODI series between South Africa and the Netherlands has been postponed.
Sport
7 months ago